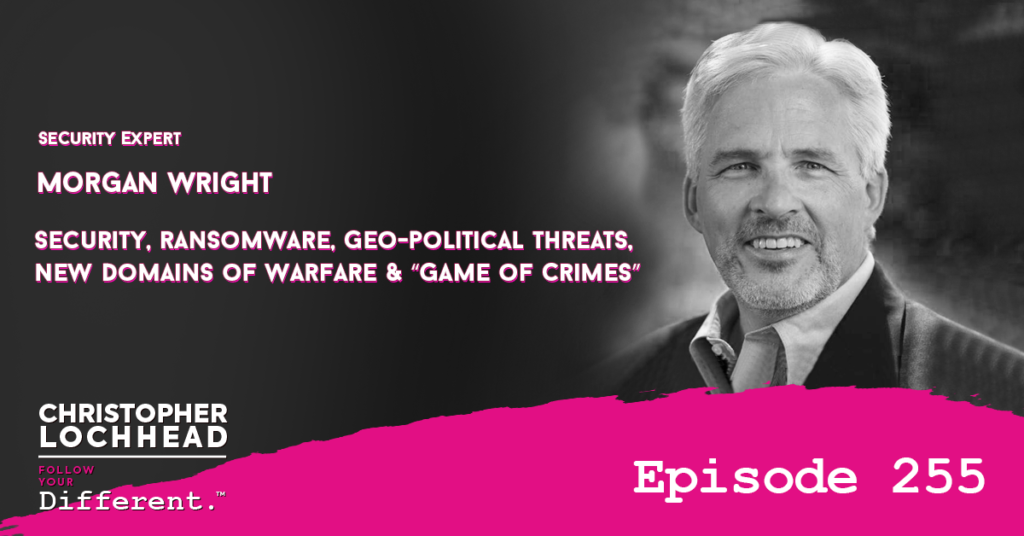 Today on Christopher Lochhead: Follow Your Different, Morgan Wright is back to talk about all things Security: new geopolitical threats, the new domains of warfare, and how they look at evil crimes through the eyes of the legendary public servants who solve them. This is a very fun, insight-packed real conversation with one of America’s highest profile crime fighting voices.

Morgan Wright is an internationally recognized expert on cybersecurity and terrorism, identity theft, and privacy. He was also a senior adviser to the US State Department, anti-terrorism program, and a senior law enforcement adviser for the 2012 Republican National Convention. Morgan has developed solutions in defense, justice and intelligence for the largest technology companies in the world. He is now also the co-host of a red-hot new podcast called Game of Crimes. This new podcast shines a light to the men and women who serve and protect.

So if you are looking for an in-depth update on how our cybersecurity stands today, stay tuned to this episode.

Game of Crimes with Morgan Wright

We open up on the topic of Morgan’s new podcast. Game of Crimes is a podcast that he co-hosts with Steve Murphy, and it is a long-form true crime podcast.

Morgan shares that they were inspired with Follow Your Different, where they go deep into the topic and explore multiple topics related to the guests. They enjoyed the format so much that most episodes end up as two-parters, because they find a lot to explore on each guest and topic.

“Our interviews are long. When I mean (long), we’re they’re always a two–parter. So that’s actually been a fun part because it kind of gets you back into it.” – Morgan Wright

There’s a risk to doing two-parters, but the payoff is if you get people hooked, they’d have to hear both episodes to get more of their fix.

Morgan Wright on Looking at the Problem Wrong

Morgan then talks about the Cybersecurity conferences that he has attended over the years. His shares that his recent favorite opener is what Elon Musk did different to become a rich guy in the world. That is, he thought differently, and revolutionized the space industry through SpaceX.

He then explains that sometimes the problem is not the biggest problem, but the way we think about the problem.

Another example he has is about bank robberies. It makes sense that if you want to beef up your security, you need to learn how the people on the other side thinks. Instead, managers and bank owners just get into their conference rooms and say what they think works, which often turns into an echo chamber of sorts.

Prevention is ALWAYS Better than a Cure

In line with this train of thought, Morgan Wright mentions that cybersecurity experts need to start looking at the problem from a different perspective. Because up until recently, the implications on cybersecurity have always been Response and Recovery. While that it all well and good, the problem with that is your systems are reactionary.

Morgan thinks that cybersecurity should be proactive, where you stop and prevent cyber attacks from happening in the first place.

“The reason we keep getting the results we have is because of the words you keep using you keep talking about Response and Recovery. That means it’s already happened to you. What you’re saying is that we should continue to buy effective fire alarms that say congrats, your house is successfully burned down. So let’s start talking about stopping and preventing. And the minute we start doing that, we will start changing what we think about the problem.” – Morgan Wright

To hear more from Morgan Wright and the current state of Cybersecurity and how the fight against cyberterrorism is done, download and listen to this episode.

He currently serves as a Senior Fellow at The Center for Digital Government, and is a national security opinion contributor to TheHill.com.

He’s made hundreds of appearances on national news, radio, print and web including CNBC, Fox News, Fox Business, CNN, ABC, NPR, NBC and more. Previously Morgan was a Senior Advisor in the US State Department Antiterrorism Assistance Program and Senior Law Enforcement Advisor for the 2012 Republican National Convention. In addition to 18 years in state and local law enforcement as a highly decorated state trooper and detective, Morgan has developed solutions in defense, justice and intelligence for the largest technology companies in the world including SAIC, Unisys, Alcatel-Lucent and Cisco.

He’s a contributing author for the 4th Edition Computer Security Handbook, and has been quoted in 2 New York Times best sellers (Sharyl Attkisson: Stonewalled and Carmine Gallow: Talk Like TED).