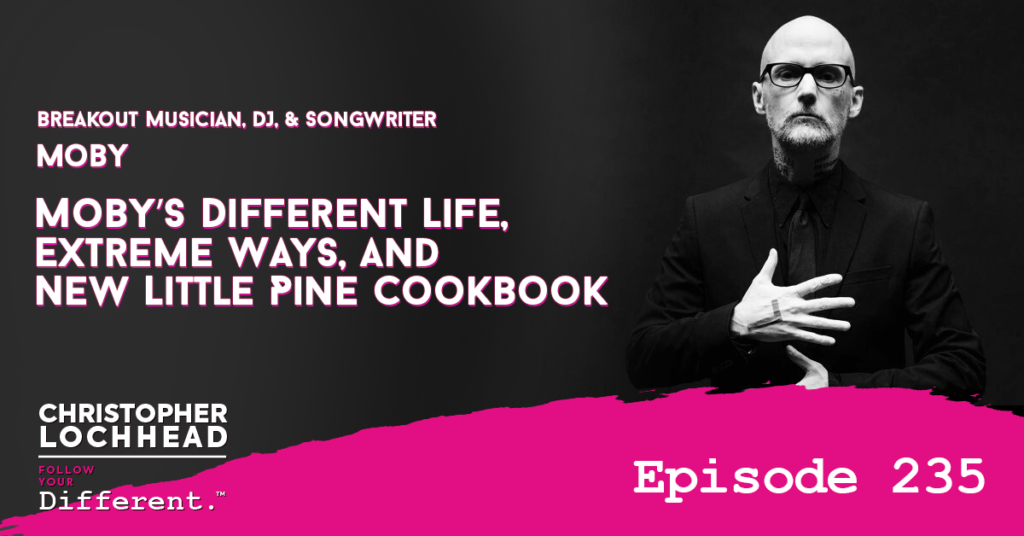 If you’re a long-time listener, you know that we do not have many celebrities as guests on Follow Your Different. We take a pass on most of them because frankly, they’re not that interesting. However, Moby is not your typical celebrity or Hollywood type.

Moby is a breakout musician, DJ, and songwriter. He’s sold over 20 million records worldwide, and he is credited with helping to bring electronic dance music to a mainstream global audience. He is also an animal advocate and a deeply-committed vegan, and he’s got a brand-new cookbook out. It’s called Little Pine Cookbook, which is based on the recipes of Little Pine, a restaurant that he had founded.

What you’re about to hear is a real dialogue like none other: from Moby’s tough start in life, to making and breaking it and having it all fall apart, then building yourself back again. You’ll also hear stories on Moby meeting his heroes, including what it was like to hang out with none other than David Bowie.

Moby on Meeting Your Heroes

To Moby, making the cover for David Bowie’s ‘Heroes’ has a personal context. He shares that when he was around 12, he had bought two David Bowie albums. Since then, David Bowie became his favorite musician of all time.

Then in the late 90’s, they became friends. Then neighbors. They even went on tours together, worked on music together, and enjoyed each other’s company.

That said, there is a saying that goes, “you should never meet your heroes, because they are sure to disappoint you.” Moby acknowledges that there are times that it is true. Though in David Bowie’s case, it only made him appreciate the person and his music more after meeting him.

Moby on Being a Public Figure

It’s not unusual to look up to icons and dream of one day becoming one. Being famous or a public figure is a dream that a lot of people have. Though according to Moby, being a public figure can be more stressful than it’s worth.

It might sound pretentious or narcissistic coming from a place of having achieved it already, but it is something Moby wishes to share through his book, ‘Then It Fell Apart’. His documentary, Moby Doc, also shines a bit of light into this:

“The idea is that the human condition is one of confusion. You know, as long as we’re human, we’re baffled. So It seems like we all gravitate towards things that give us a sense of meaning, structure, and status. And so the book ‘Then It Fell Apart’ and ‘Moby Doc’ is sort of looking at that. Like how I had my own individual experience of bafflement, and how I tried to find anything that would give me that sense of meaning, purpose, status, comfort, what have you.” – Moby

When asked whether he thinks that he’s “living the rockstar life”, Moby thinks that he has lived a life so far that has given him a unique perspective. As someone who has been to the extreme ends of both poverty, wealth, and varying degrees of fame, it has given him an insight that is undenyingly his own.

Yet while the specific details are unique to him alone, the general circumstance is not. That is why Moby felt that he had to share his story. Not so much as to show everyone what he has achieved in his life so far, but as a reference for those who are aspiring for such a lifestyle, or those who might be in a similar situation.

To hear more from Moby and his insights on meeting your heroes and living an accomplished life, download and listen to this episode.

Richard Melville Hall, known professionally as Moby, is an American musician, songwriter, singer, producer, and animal rights activist. He has sold 20 million records worldwide. AllMusic considers him to be “among the most important dance music figures of the early 1990s, helping bring dance music to a mainstream audience both in the United States and the United Kingdom”.

In addition to his music career, Moby is known for his veganism and support for animal rights and humanitarian aid. He was the owner of TeaNY, a vegan cafe in Manhattan, and Little Pine, a vegan restaurant in Los Angeles, and organized the vegan music and food festival Circle V. He is the author of four books, including a collection of his photography and two memoirs: Porcelain: A Memoir (2016) and Then It Fell Apart (2019).

Then It Fell Apart