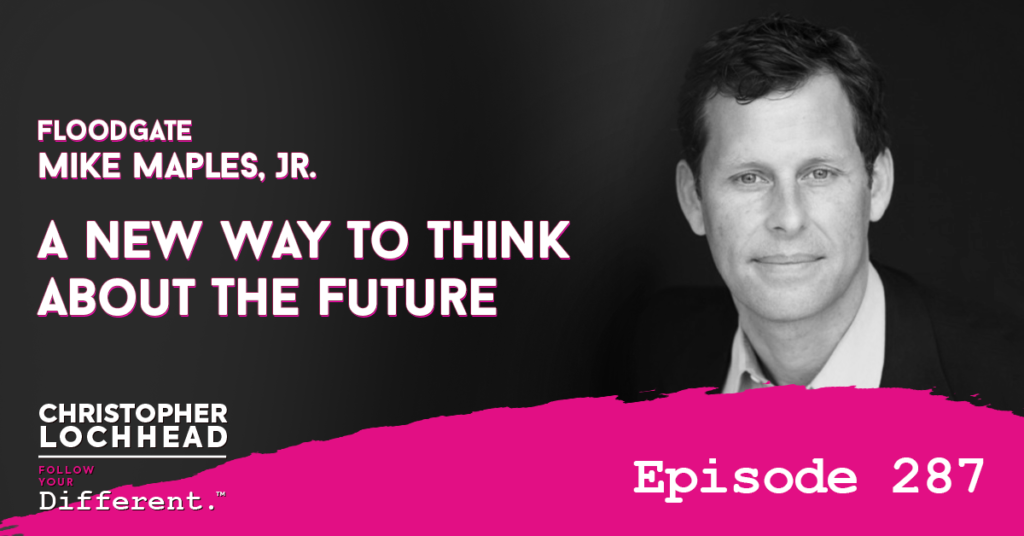 On this episode of Christopher Lochhead: Follow Your Different, we talk about the idea of startup capital, how to have an exponential career, and maybe even a new way to think about the future with our guest, Mike Maples, Jr.

Mike Maples, Jr. is the co-founder of Floodgate Capital. Floodgate has led early-stage investments in companies like Twitter, Lyft, and much more. His podcast, Starting Greatness, is truly one of the greatest business podcasts there is.

That said, let’s get into the discussion of how to think about the future.

From Value Creators to Rent Seekers

Mike Maples, Jr. dives into the idea of the industries and business leader’s mindset and drive for creating new ideas or the lack thereof.

At the time when the animating forces behind industrial economy was mass production, mass distribution, and eventually mass computation, the focus in new technology and ideas revolved around improving performance. Over time, it evolved into developing networks, whether physical or via software, and value was derived on how vast your network reached.

Fast forward to recent years, in which Mike started noticing that there was a disconnect with most of the ideas from the founder of a company, to its current inheritors. A lot of them are starting to focus on creating a status quo, rather than moving forward. As a result, a lot of people in business make money through financial engineering rather than things that improve productivity.

“They’ve transition from being value creators to rent seekers. And they’ve started to become more interested in preserving their institutional power than in fulfilling their mission to their constituents.” – Mike Maples, Jr.

Mike Maples, Jr. on Nurturing an Economy that Rewards Productivity

According to Mike, the issue nowadays is that people make money from the market without creating new ideas, and are incentivized to do it in the current financial economy. In order to become a successful society, we need to incentivize productive behaviors to move forward.

“So hedge fund guy borrows money close to 0%, and then buys IBM stock or loans at IBM so they can buy back their own stock. And since they know they’re gonna do that they front run it. And so Okay, did any jobs get created in that? No. Did any new products get created in that? No. But people who played financial engineering games did well. And what you want is an economy that is not financialized. You want an economy that rewards productivity gains, because fundamentally all abundance and standard of living advancement comes from people being more productive.” – Mike Maples, Jr.

Engaging in fakery and keeping this charade of an economy will just lead to a cycle of economic bubbles and bursts in the future.

If the current system won’t lend itself to shifting back to a productive economy, then the third option is to exit. Though it was not as feasible before as it is now, Bitcoin and other non-Fiat currencies have given us the chance to break free and start over, without being tied down by Fiat economies.

That said, Mike has been playing around the idea of a Startup Capitalism. As with most startups, they focus on creating a different future than just following the current flow of things. Which is why startups are born from the pursuit of new ideas, and could be the drive to a more productive economy that Mike wanted.

And you don’t necessarily need to start a new company to create a startup. It could be born inside a bigger one, much like the iPhone inside Apple.

“At the very least, you get to exercise the option of doing things in a different way. “– Mike Maples, Jr.

To hear more from Mike Maples, Jr. and his ideas on how to Rethink the Future, download and listen to this episode.

Mike Maples, Jr. is the Co-Founder and Partner at Floodgate, the host of the Starting Greatness podcast and a Co-conspirator with awesome Startup Founders.