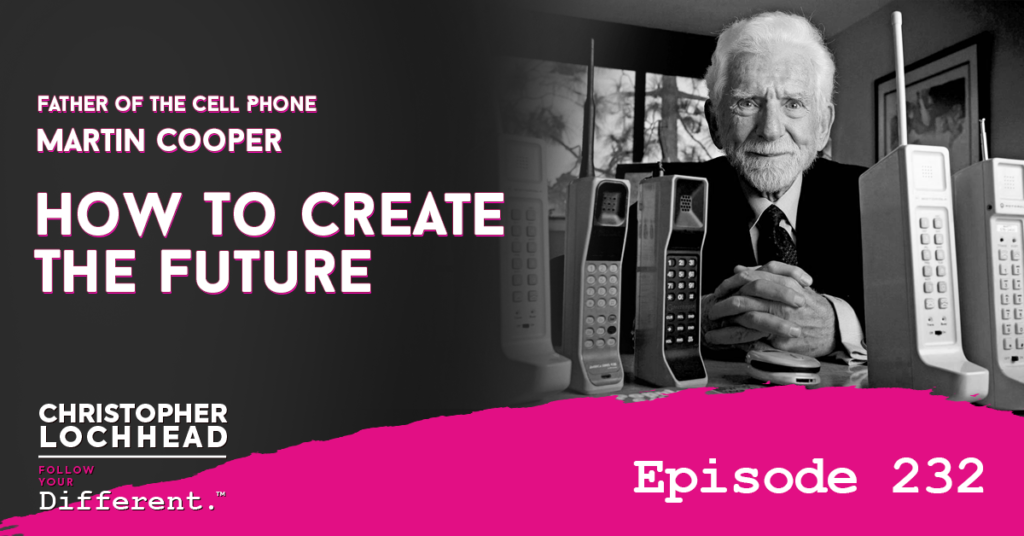 In this incredibly special episode of Follow Your Different, we have a person that is like no other that has ever been on this podcast. We know the names of many of the legendary innovators and category creators of the modern era: people like Henry Ford, Steve Jobs, Bill Gates, Elon Musk, and many others are rightfully celebrated worldwide. Yet most people don’t know who the father of the cell phone is. The man behind it all is Martin Cooper, and he is our guest for today.

In the last 100 years, there is no category of technological breakthrough more important than the cell phone. While there are others that are equally important, it is not an exaggeration to say that the mobile phone changed the trajectory of humanity. The cell phone created a radically different future that has created and it continues to create exponential benefits for humankind.

I’m very grateful that Marty took the time to write his new riveting book, it’s called Cutting the Cord. Because now, we have a first-person account of the life and the learnings of a legendary innovator, engineer, and category creator, and frankly, American, Martin “Marty” Cooper.

What follows is an unedited, uninterrupted conversation with Martin Cooper. We cover everything from his definition of what technology is, to why he’s irked by how the mobile companies have rolled out 5G. We also talk about his thoughts on how to bridge the digital divide and how to bring the internet to everyone, which he is really passionate about.

So if you want to hear more from the Father of the Cellular Phone himself, stay tuned to this episode.

Unfortunately, that access is only afforded to half the students nowadays, even in an advanced country like the United States. Others either have no access to it because of the cost, while some have no decent service available to them at all. For Marty, the idea is simply ridiculous, especially during this day.

“There is no technological reason for that to be the case. The carriers that provide us with service, people like AT&T, T Mobile, Verizon, and many other carriers license the radio spectrum from us. Their licenses have one basic requirement: and that is that the use of the spectrum should be in the public interest and convenience. And yet, there we have it 25% of our country is not covered, and 25% of our population can’t afford the service.” – Martin Cooper

Some of Marty’s suggestion regarding the matter is to make it more accessible to the public, either by lowering rates, or building a system where its almost a necessity for each household to have such a connection. Even if it means having the government shoulder the cost. Because the alternative is having a population where half of it is being left behind in terms of education.

For Marty, 5G doesn’t really affect the average consumer. It is mostly targeted on businesses, companies, and other structures of that nature. What irks him about this is how they are promoting it, saying that they will be useful to industries such as autonomous cars and remote surgery.

The main thing about those two examples is that it’s not only fast connection that will enable it to be effective. You also need a network where it can operate at very low latency, so that reaction times will be instantaneous. It would be bad if two autonomous cars that are about to crash to have a few seconds delay on their response. You definitely do not want a doctor doing a crucial operation on someone being hampered by lag.

“I think the FCC should be taking some action to either get the carriers to fill this gap in their service, or let other people come in and do it via the radio spectrum.” – Martin Cooper

Marty pointed out that nowadays, there are more cell phones out there than people. This is because most people have at least one phone, and there are some who have multiple mobile devices on them. This indicates that a lot of people are naturally mobile, though that might not be the case during this time. The point is, these phones and other mobile devices are being used daily to do pretty much everything in the society nowadays.

Yet when you talk to politicians about giving access to everyone, their go-to response is still to provide cable service. The problem with this is that wired telephone is a thing of the past, and it is slowly being phased out even by the cable companies they tout.

“In the United States, there are only less than 60,000 wired telephone left, yet there are more cell phones and people. So the answer is that somehow, we have to provide wireless access to everybody, for all of the services, and the most essential service today is education.” – Martin Cooper

To hear more from Martin “Marty” Cooper and his thoughts on the future of technology and bridging the digital divide, download and listen to this episode.

Martin Cooper is an engineer, inventor, entrepreneur, and futurist. He is known as the “father of the cell phone.” He led the creation of the world’s first cell phone at Motorola—and made the first public call on it. Over nearly three decades at Motorola, Cooper contributed to the development of pagers, two-way radio dispatch systems, quartz crystal manufacture, and more.

A serial entrepreneur, he and his wife, Arlene Harris, have cofounded numerous wireless technology companies. This includes Cellular Business Systems, SOS Wireless Communications, GreatCall, and ArrayComm. Cooper is currently chairman of Dyna LLC and a member of the FCC’s Technological Advisory Council. He was the first to observe the Law of Spectrum Capacity, which became known as Cooper’s Law.

In 2013, Cooper became a member of the National Academy of Engineering from whom he received the Charles Stark Draper Prize for Engineering. He was awarded the Marconi Prize “for being a wireless visionary who reshaped the concept of mobile communication.” He has been inducted into the Consumer Electronics Hall of Fame and Wireless History Foundation’s Wireless Hall of Fame. The Radio Club of America awarded him a Lifetime Achievement Award in 2010. He is a lifetime member of the IEEE, was president of its Vehicular Technology Society and received its Centennial Medal. In 2007, Time magazine named him one of the “100 Best Inventors in History.” He is a Prince of Asturias Laureate.

Cooper grew up in Chicago, the son of Ukrainian immigrants. He attended Crane Technical High School and the Illinois Institute of Technology, where he is a Life Trustee. He served in the US navy as a submarine officer during the Korean Conflict.

Check out his book: Cutting The Cord

Meet the Inventor of the First Cell Phone