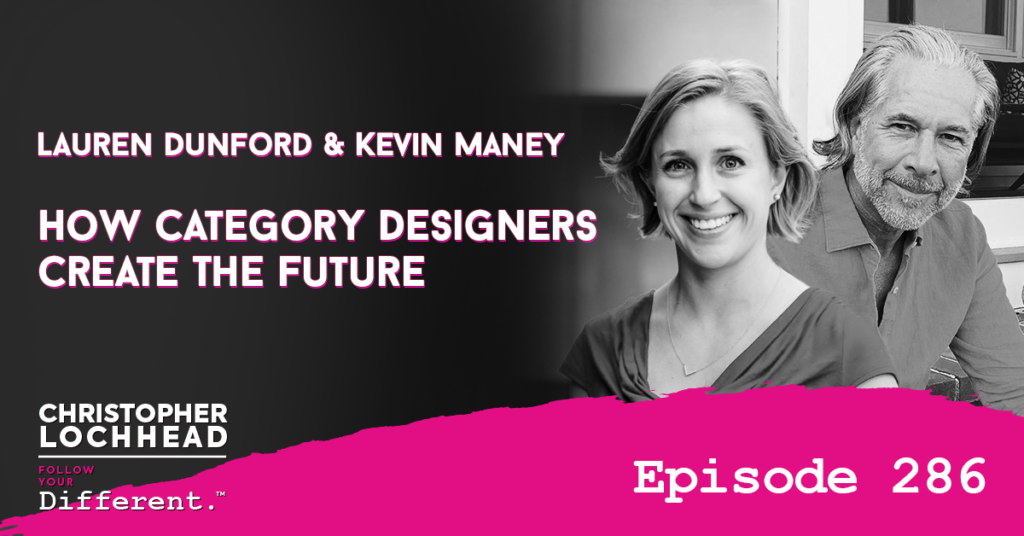 On this episode of Christopher Lochhead: Follow Your Different, our guests Lauren Dunford and Kevin Maney discuss how Category Designers work to create the future. On this topic, we also talk about how do you create a company that makes a difference and makes money at the same time.

Lauren Dunford is the cofounder and CEO of an extraordinarily exciting new company called Guidewheel. They are a mission to empower all the world’s factories to reach sustainable peak performance.

Kevin Maney is a legendary bestselling author and award-winning columnist. He’s also the co-founder of Category Design Advisors, where he helps companies create and dominate new market categories. He is also one of the co-authors of Play Bigger, and one of the Godfathers of Category Design.

If you care about building companies that changed the future, I think you’re gonna love everything about this episode.

The conversation starts off with an explanation on how Lauren Dunford and Kevin Maney met, and the work they have done together on category design.

Kevin knows Lauren from the work they have done on the category design project on Lauren’s company, Guidewheel. Kevin was really interested with Lauren’s work, as he explained:

“There are actually two tracks of reasons that I very interested in Lauren, and her company guide wheel and one is the category design aspect, which I feel like was a very exciting project. But then also, there’s another track of the book that I wrote that came out earlier this year called Intended Consequences.

The idea behind that book was that there’s been lots of conversation out there about responsible innovation and how a company’s ESG had companies to do good and everything. And hang on. And we were talking about the fact that there wasn’t really a real playbook for like, if you wanted to start a company that was like this.” – Kevin Maney

As he was writing the book, Kevin realized that a lot of conversations he had with Lauren Dunford line up with the ideas that they were talking about in the book; mainly how to setup a company that from the beginning, will be a company that is profitable and does something really good.

We then pivot to a discussion on Lauren’s company, Guidewheel, and the work they are doing to make the business a force for good.

Lauren and her co-founder were undergrads in Stanford, where they ran competing climate change groups. Afterwards, they consolidated their efforts and aimed to create a profitable business objective that still had a massive impact on climate change.

“We work with factories, and the category we’re building is Factory Ops. Our goal is let’s have all of the world’s 10 million factories, having the tools to reach sustainable peak performance, if we can do that at scale huge for their businesses. And then, of course, your massive impact for the planet because of how much emissions results from how we make those guitars and everything else on the planet.” – Lauren Dunford

Lauren describes the category of Factory Ops as making the tools of the biggest factories run efficiently, so there are less waste and by-products. This in turn meant that companies will have the same, if not more, output while contributing less to factors that cause climate change.

To hear more from Lauren Dunford and Kevin Maney on how to create a company that makes a difference and makes money at the same time, download and listen to this episode.

Lauren Dunford is the co-founder and CEO of Guidewheel, on a mission to empower all the world’s factories to reach sustainable peak performance and recognized by the World Economic Forum as one of the 100 most promising companies globally poised to have a significant impact on business and society.

He has been writing about technology for 30 years, has interviewed most of the tech pioneers you can name, and brings broad and deep context to Category Design conversations.

He is co-author of the book Play Bigger, and has been an A-list writer and thinker about technology for 25 years.

Kevin’s most recent book is UnHealthcare: A Manifesto for Health Assurance, which proposes a new category of healthcare. It is co-authored with Hemant Taneja of General Catalyst and Stephen Klasko, CEO of Jefferson Health.

Kevin and Hemant also co-authored the 2018 book Unscaled: How AI and a New Generation of Upstarts Are Creating the Economy of the Future.

His other books include The Two-Second Advantage (a 2011 New York Times best seller), Trade-Off: Why Some Things Catch On and Others Don’t, and The Maverick and His Machine: Thomas Watson Sr. and the Making of IBM.

Kevin wrote a regular column for Newsweek, and has been a contributor to Fortune, The Atlantic, Fast Company and ABC News, among other media outlets. He was a contributing editor at Conde Nast Portfolio and for 22 years, Kevin was a columnist, editor and reporter at USA Today.