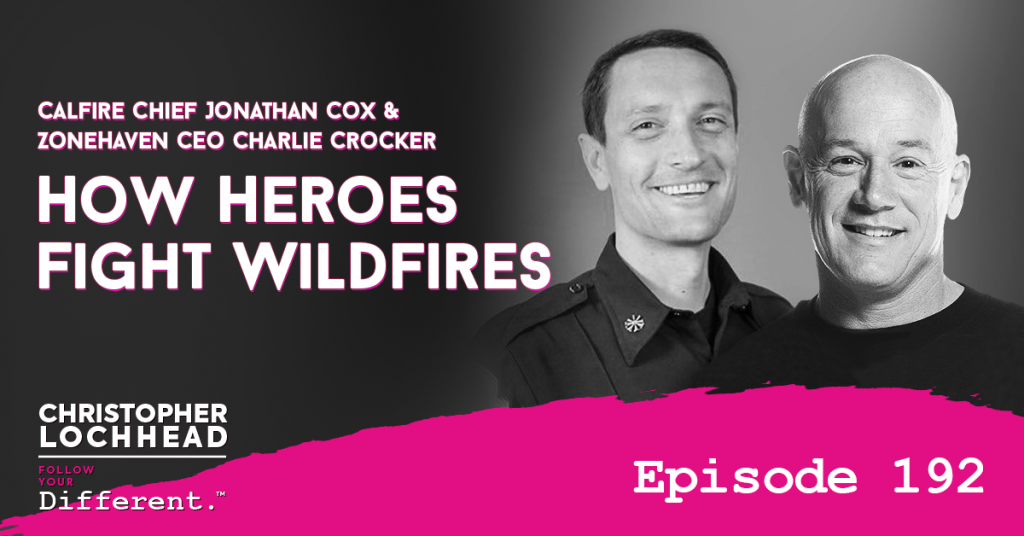 In this episode, a truly legendary conversation with two extraordinary men, men who are on a mission to stop deadly wildfires. First, we have Charlie Croker, the founder and CEO of Zone Haven. Zone Haven is using data to everything technologies, to help government agencies and citizens both plan for and respond to serious disasters.

Our second guest is Chief Jonathan Cox, CalFire Executive who is responsible for fire operations in this region.

Together, Charlie and Jonathan share how firefighting heroes stop these fires and save countless lives and billions in property.

A Night Californians Will Never Forget

The night of Saturday, August 15 2020, a massive lightning storm hit the region. Approximately 12,000 strikes of lightning hit Northern California which caused massive fires. The wildfire lasted for weeks and it destroyed almost 10,000 buildings along with the big basin redwoods State Park, and took the life of one person.

“It was a horrifying fire and it started eating the mountainous area that has a lot of underbrush, some of the most beautiful ancient redwoods, and a lot of wonderful homes, towns and businesses.” – Christopher Lochhead

The Worst Fire Season In History

Chief Jonathan Cox recounted to Chris how they had expected the worst for the wildfire season. However, they did not expect this horrible incident to have grown into that magnitude. He further explained their process and prioritization and how technology from Zone Haven has contributed a lot to their firefighting efforts.

“We’re very good when there’s one or two large fires burning, getting an incident management team assembled and getting resources drawn throughout the system. But this really was one of those moments where you had concurrent major emergencies happening in a small geographical area, really in the Bay Area, and a little bit north, and it really turned into a prioritization of resources based on the threat to humans and the threat to structures.” – Chief Jonathan Cox

Charlie Crocker, from Zone Haven shares the technology as it relates to helping CalFire make sound decisions during that emergency. He further shares in this episode how their communication strategy, along with the CalFire executives, were in sync and were out of the box, that it made drastic results in terms of preventing more damages.

“The main focus of it and why we’re called Zone Haven is that we really focus on very small neighborhoods or zones. So these zones are smart. They know the number of people, they know how quick, how long it’s going to take for people to get out of there.” – Charlie Crocker

To know more about How Heroes Fight Wildfires and for more information about CAL FIRE Chief Jonathan Cox & ZoneHaven CEO Charlie Crocker, download and listen to this episode.

In addition, he spent several years as the Northern California spokesperson for CAL FIRE. Jonathan was also a founding member for CAL FIRE’s land use planning program at the Office of the State Fire Marshal (OSFM), working with local jurisdictions to make informed land use decisions related to the threat of wildfire.

Jonathan also responds to, and manages, some of California’s largest disasters. He spent five years as a member of CAL FIRE’s Incident Management Team 6 (FEMA Type 1), where he served on the command staff in the capacity of Public Information Officer (PIO1).

He has also completed an intensive training at the United Nations Institute for Training and Research (UNITAR) in Geneva, Switzerland.

Jonathan is a State of California (OSFM) certified Chief Officer and Registered Instructor.

Additionally, Jonathan is an emergency response educator and trainer in the field of emergency management and crisis communications.

He has been a subject matter expert speaker at numerous conferences, including the National Fire Protection Association. His work has spanned five countries and involved working with hundreds of professionals.

He has lived in the US, Denmark and the United Kingdom.

Charlie is the Co-Founder and CEO of Zonehaven Inc.

He is a data geek and entrepreneur with more than 25 years of experience building teams to bring data out of the shadows and drive business value.

Prior to Zonehaven, he built Autodesk’s first big data platform team to support migration to subscription and the cloud. He also led product management for Autodesk’s flagship AutoCAD product line.

Prior to Autodesk he was co-founder in a start-up focused on spatial databases and web-based tools for state and local government agencies and utility companies.

Charlie has a passion for growing young leaders.

He mentors MBA and MSBA students at UC Davis and California College of the Arts.