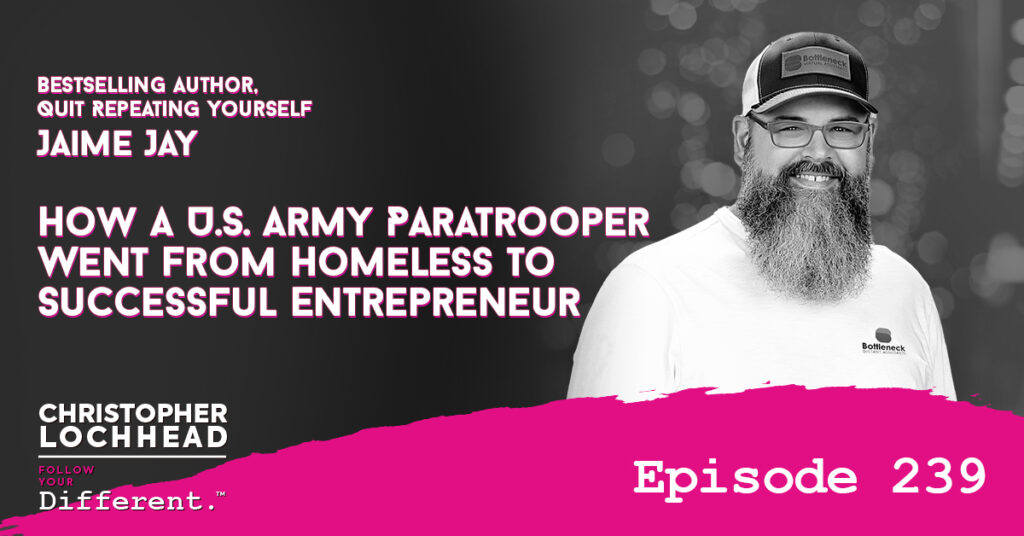 We hear a lot of talk about courage, grit, and being mission-driven. Well, imagine being a young man who decides to serve his country and become a US Army paratrooper, only to become homeless after his active duty. Now imaging finding a way out of complete desperation to become a successful entrepreneur, and now bestselling author. That is Jaime Jay, and he is our guest in this episode of Follow Your Different.

Jaime Jay is the co-founder of Bottleneck Distant Assistants, and the author of the new bestselling book, Quit Repeating Yourself. Jaime and I have been working together for years, and he has helped me in most of my digital endeavors. This includes building Lochhead.com, as well as handling all of the technical issues with my podcasts and much more.

What you’re about to hear is an inspiring story of how Jaime designed a legendary business and life with his partner, Sara. Pay special attention to how Covid19 almost destroyed Jaime’s business, and how a new category design helped it to come back from the brink and power the company to even greater heights.

Jaime Jay in the US Army

There is a special place in my heart for our vets, and even more so for those who have become entrepreneurs after serving their duty. So I asked Jaime about his military service.

Jaime was part of the elite 82nd Airborne Division, and was trained as a paratrooper. He recalls how intense the training was to be part of such an elite organization, and be battle-ready for when the country needs them.

Jaime Jay on Being Homeless

Jaime shares that he has been homeless on two separate times of his life. The first one being related to his younger days, and the latter was after he had left the military. Yet he never let these circumstances weigh him down, and he continued to strive for a better life.

He talks about these points in the book as well, not for people to feel bad for him, but to see that despite all of that, you can still persevere and live a good life.

“By the way, the reason I tell these stories is not for people to ever feel bad for me or anything like that. But I want people to realize what all of this led to. I’m actually blessed that all this happened because all of this led to a better life where I appreciated so much more. The friendships like the friendship that I have with you, I will forever appreciate this for the rest of my life. I was able to find the woman of my dreams. And I appreciate it on such a different level, just the same way that I appreciate the work that we’re doing.

So the reason that I tell these stories in here is because I really want people to understand that, hey, it’s possible to do whatever it is you’re passionate about. So it’s kind of motivating, but there’s a method to the madness. “ – Jaime Jay

One of the things Jaime and I have worked on this past year was when we created a new category that deals with remote assistance. You might say we already have that, and it’s called virtual assistants.

Though the problem with virtual assistants nowadays is that the category has been inundated with big corporations who deal more with technology rather than the human aspect of it. While there are merits to automated assistance run by AI and such, there is something to be said for having an actual person handling it for you, and that flexible decision-making that can’t be achieved by AI yet.

“People are using a lot of AI and stuff to manage the calendar to send out emails, automation. That’s all fine and dandy, and there are some great use cases for that. I’m not here to argue that, but I also think there’s something to be said for having that human, that intimate-based relationship between one human to another. No matter if it’s an assistant, web developer, CEO, whatever, there’s always going to be something to be said, for having that human based, intimate relationship.” – Jaime Jay

To hear more for Jaime Jay and how you can Quit Repeating Yourself when running your own business, download and listen to this episode.

Jaime Jay is a connector, starter – geek, podcaster and founder of the award – winning Bottleneck Virtual Assistant Services company that offers professional growth opportunities for ambitious leaders by creating an efficient and systematic approach to identify, hire and cultivate team members who focus on specific roles and responsibilities through a single point of contact. He served in the U.S. Army as a paratrooper in the 82nd Airborne Division and worked in corporate America for over 12 years before becoming a full-time entrepreneur in 2006.

Jaime Jay is the host of the ‘Live with Bottleneck’ show. He participates in interesting dialogs with his guests where listeners are able to participate in the conversation during the live format. His guests are some of the brightest minds in business today. Stop the Bottleneck in YOUR business by watching his show today

In addition to running the distant assistant company and hosting his show, he is the author of Quit Repeating Yourself. This book is all about setting up your business with a strong culture, leading with kindness, creating systems and processes, and learning how to recruit and hire effectively. If you are in business, this book i s a must read.

Jaime lives in Springfield, Missouri with his wife Sara and their dog Nikita. He is an amateur hockey player, enjoys spending time on their boat on Table Rock Lake and traveling. Fun fact: Jaime has been playing ice hockey for over 45 years . He also loves traveling, playing guitar, hanging out with friends and doing the occasionally crazy thing like jumping out of perfectly good airplanes.

Check out his new book: Quit Repeating Yourself