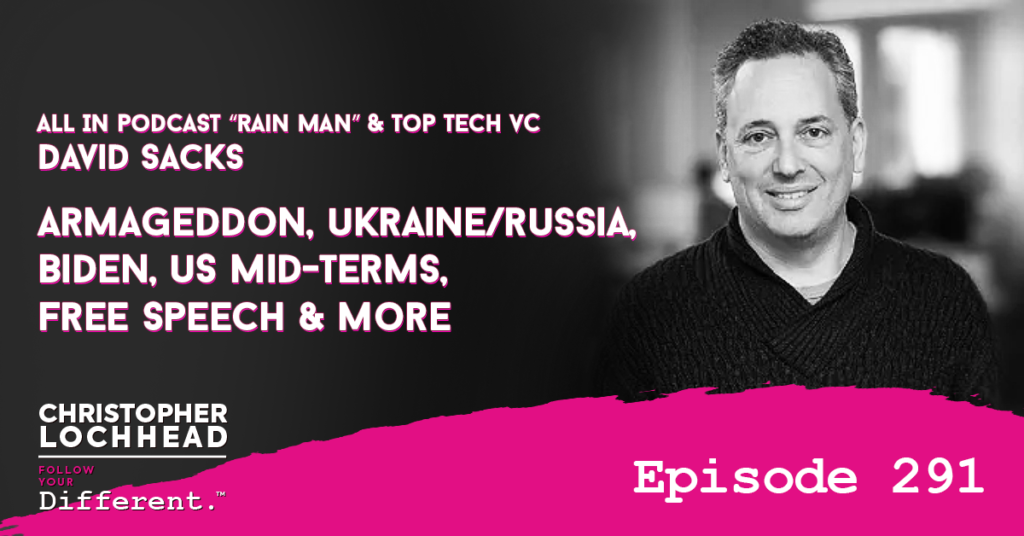 US President Joe Biden recently warned about the possibility of Armageddon. He said “we have not faced the prospect of Armageddon since Kennedy and the Cuban Missile Crisis.” On this episode of Christopher Lochhead: Follow Your Different, we discuss the current situation in the US and around the world with All In Podcast Rain Man, David Sacks.

David Sacks is a legendary entrepreneur, category and company builder, and now venture capitalist. He’s the founder of a VC firm called Craft Ventures. He was the founding Chief Operating Officer of PayPal founder and CEO of Yammer, which sold to Microsoft for well over a billion dollars. He has been an early investor in companies like Facebook, Twitter, Uber, SpaceX, Airbnb, Slack, and more. And today, he’s also incredibly well known as one of the CO hosts of the All In podcast.

So listen in to keep up with current affairs, and you might learn a thing or two on how to prepare for the future.

We begin on the recent comments that Biden made about Armageddon. When asked why he thinks Biden’s thoughts went that way, David’s reply was:

“My reaction to this was the man who can’t see two steps ahead, suddenly realizes where his policy is leading. We’re the ones who have refused to engage in any sort of diplomacy or any sort of negotiated settlement. Our strategy is not to provide them with an off ramp.” – David Sacks

But David also thinks that Biden acknowledging this is a step in the right direction.

“That being said, I still thought it was incredibly useful for Biden to say what he said, because the first step of getting out of a problem is acknowledging that you’re in one.” – David Sacks

There has also been talks of using tactical nukes to quickly resolve the situation. David does not agree with this, saying that using nukes at this point just opens up the risk of a nuclear war.

“If a tactical nuclear weapon gets used in Ukraine, then the whole world will be different. This thing could escalate very quickly into a larger scale nuclear war.

You had Petraeus on the Sunday shows last weekend saying that if Putin uses attack nukes, the US should respond by hitting every Russian military target in Ukraine? Well, again, think two steps ahead. How do you think the Russians would react to that, given that they clearly don’t have the military might to stand up to the US in terms of conventional arms?” – David Sacks

If countries start using nukes, then it signals that the former agreements against it can be violated with impunity. And that is a dangerous ground to tread.

Returning to Biden’s statement about Armageddon, David suggests that, rather than being a prediction, this statement, along with Petreaus’, could be interpreted as a warning or deterrent against Russia going nuclear.

The problem is that the reasons why the Russians might escalate to the use of nuclear weapons is because they’re losing the war by conventional means. Add to the fact that Putin doesn’t have an off ramp that lets him keep his reign. Because if he loses this war, or doesn’t gain anything significant from it, it is very likely that he will be forced out of office by the public.

Putin is pretty much acting like a cornered beast at this point. The scary part is that you don’t know what that cornered beast might do as a last-ditch effort to escape.

To hear more from David Sacks and the current situation of the world, download and listen to this episode.