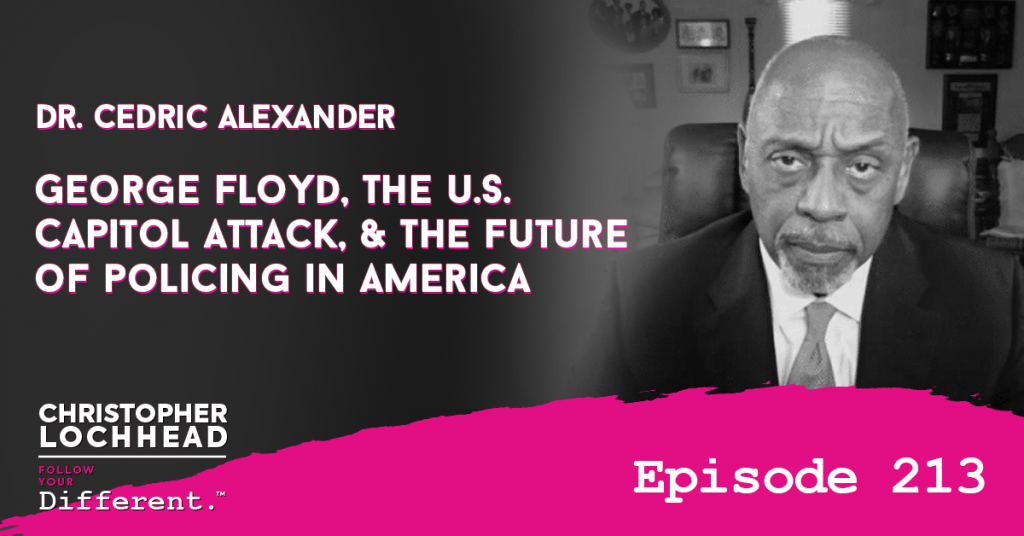 As you know, the United States of America is in a deep, much-needed conversation about race, equality, justice and policing. This was sparked in large part by the killing of George Floyd and now his murder trial.

In this very special episode of Follow Your Different, we are honored to bring you this legendary dialogue with one of the most qualified, experienced, and highest-profile law enforcement leaders in America, Dr. Cedric Alexander.

You’ve probably seen Dr. Alexander on stage giving a speech or on television. Yet unlike TV, where you only get a few minutes with him today, we go deep, like you can only go on a real dialogue podcast. This is a very special conversation that you’ll surely enjoy.

According to Dr. Cedric, rethinking policing is not a new thing. They have been thinking of new ways for policing to serve the community and get them involved. He said that they have made significant progress with it under the former President Obama’s directive, as part of the Task Force on 21st Century Policing. Unfortunately, it got shelved as a new administration was ushered in.

Though regardless of which administration is in play, police departments and officers have to understand that the times are changing. They might get tired of the community asking for transparency from them, but this is not a bad thing. It only means that the community wants to be involved in ensuring public safety, and they should embrace that.

On Defunding the Police

Dr. Cedric Alexander then talks about the calls to defund the police, and how he thinks it is the wrong approach to reimagining Policing as a whole. Police departments need that budget to do the things that solve their cases and carry out their mission to the community.

What Dr. Cedric suggests is that the police should be specific on what they have to do for the community, and focus on that alone. Set standards on those specific tasks and duties, and hold them to those standards. As of right now, he believes that people are asking police to do things that they’re not trained to do.

“We have to really define and be very clear about what we want police to do in our communities, and not take monies away from them. Though they need to find other monies to fund some of these other social service organizations that can get the people who are struggling with homelessness, mental health issues, and domestic issues. You don’t take that out of police budgets. You let them have what they need in order to provide good public safety. Hold them accountable to that, with some ways to measure that success.” – Dr. Cedric Alexander

The Importance of Community Policing

Dr. Cedric goes back to his point on Community Policing, and how important it is to build a great relationship with the community you protect. Since no matter how technologically advanced or highly-skilled your police department is, getting information to solve crimes will be harder when no one in the community is cooperating with you.

“I tell police officers this all the time, you’ve been given the authority by the state. But it is the communities that give you alone your legitimacy, in order to carry out your function. When we have a trusting relationship, and we’re constantly working on that relationship, when something happens, we don’t separate from each other, we join together to try to find resolve to it.” – Dr. Cedric Alexander

To hear more from Dr. Cedric Alexander and his thoughts on George Floyd, the Capitol Attacks, and more of his insights regarding the current and future state of Policing in America, download and listen to this episode.

A visionary leader who has served over four decades in law enforcement and public service, there’s few more qualified to speak on the growing strife between race, communities, and the police.

In his frequent, high profile commentary on CNN’s Amanpour, NBC News, and MSNBC, he poses the hard questions about systemic racism in our country and the need for police reform.

Cedric remains front and center on these issues that have inflamed our nation.

He speaks out on the violence while providing concrete solutions about how to navigate these troubled waters to address the problems plaguing law enforcement and the communities of color they serve.

Dr. Alexander brings to the conversation lengthy experience as the former Chief of Police in DeKalb County, GA, President of the National Organization of Black Law Enforcement Executives, and member of President Obama’s Task Force on 21st Century Policing. Throughout his career, he has been pivotal in reforming troubled police departments and restoring trust between them and their communities.

He is also the author of In Defense of Public Service: How 22 Million Government Workers Will Save Our Republic that features endorsements from the late U.S. Representative Elijah Cummings, Retired Major General James “Spider” Marks, and attorney Barry Scheck from the Innocence Project.

His insight into the non-elected “fourth branch” of government—our nation’s public servants, civil servants, and first responders—as those who will save the nation by helping bring our greatly divided society together is uncanny during today’s times.

Cedric has testified before the House Oversight and Reform Committee on Facial Recognition Technology, as well as on the pros and cons of using body cameras, drones, and crime mapping in law enforcement.

He sits on the board of the Innocence Project, working to exonerate the wrongly convicted through DNA testing and reforming the criminal justice system to prevent future injustice.

He is also consulting with companies such as AT&T FirstNet, the first nationwide network dedicated to public safety to help law enforcement, fire service, and EMS do their jobs safely and effectively.

With a doctorate in clinical psychology from Wright State University, Cedric is equipped to address the prevailing issues nationwide. In every situation, he conveys a sharp understanding of human nature, the breadth of issues facing our communities, and how to break through to create a solution everyone can unite behind. Widely respected for his ability to lead thoughtfully and respectfully, he transcends both public and private sectors in an effort to foster positive change.

Other information about Dr. Cedric Alexander:

What the Plan Now America

This is a Job for Cedric Alexander