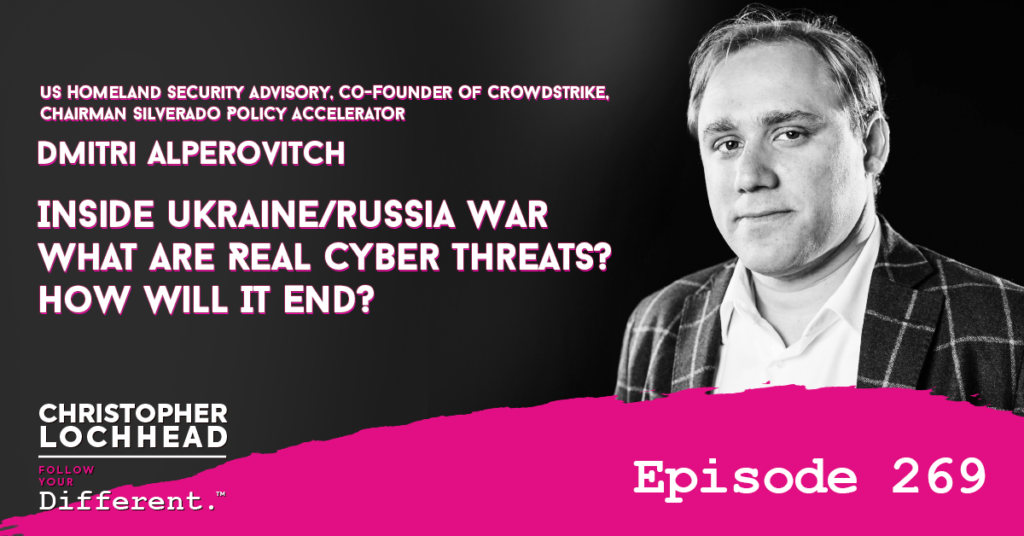 On this episode of Christopher Lochhead: Follow Your Different, we go deep into topics that traditional television could and would not go. Specifically, we talk about the war in Ukraine, and where all of this might end with our guest, Dmitri Alperovitch. We also talk about cyber threats, and how capable the US is against it.

Dmitri Alperovitch is one of America’s top cybersecurity experts. He is on the US homeland security advisory council, and the co-founder and former Chief Technology Officer of the $50 billion market cap CrowdStrike. Right now, he is also the chairman of Silverado Policy Accelerator.

So when he talks about cyber threats and security, you’d best listen in.

The conversation starts off with Dmitri explaining that the United States has the capability to take Russia off the internet. They could it temporarily, or even permanently – though it could prove complicated to do so. Both of which can be escalatory and provocative.

Dmitri’s point on this is that rather than slowly matching Russia’s actions with certain sanctions or retaliating in a similar manner, the US can use this to send a message and stop those attacks from further escalating in the first place.

“If they do launch those attacks, in my opinion, we need to be very thoughtful about our response. We need to make sure that we achieve escalation dominance, in that we stop those attacks that in their tracks that we send a very strong message to Moscow: that this is not going to be tolerated, this is not going to be acceptable.” – Dmitri Alperovitch

As to why this would serve as a great deterrent, Dmitri explains that while they could still send people to do cyberattacks on the US from other places, this would send a strong signal to make them think twice about it.

Because like the rest of the world, they are also dependent on this digital resource to run their country. Nowadays, energy sectors, healthcare, and logistics see the highest usage rate for it. So in effect, shutting down their internet capabilities could have a strong effect on their economy as well.

“The goal of the internet shutdown is not to stop cyber attacks; that is an impossibility because they can launch them from any place. And we’re not going to go around the world shutting down countries from the internet. That’s not an interest in the United States. The goal is to demonstrate the type of effect we can have on their economy, if they continue to judge those attacks from wherever they may launch them, from Russia or elsewhere.” – Dmitri Alperovitch

Though Dmitri warns that this should only be done as a retaliatory action or response to an attack, rather than a pre-emptive strike. Because if they decide to do the latter, it might suddenly invite attacks, so the US should consider things carefully first.

The Effectivity of Cyber Attacks

Dmitri describes cyber attacks as a perfect tool for inflicting damage but having the option of anonymity or deniability. One can execute it remotely, and still have impact on a far-away area or country. Though for something as overt as what Russia was doing, defaulting to kinetic weapons and outright war could achieve their objectives.

Though it is not to say that cyber attacks is ineffective in this case, as Dmitri shares what happened in the first few hours or the Russian attacks on Ukraine.

“One of the attacks that has not gotten a lot of attention was the hack of a US-based satellite provider called ViaSat that has a subsidiary that provides satellite communication services to Eastern Europe, particularly the Ukraine military. The Russians had actually hacked that satellite provider, or actors are believed to be Russian. They were able to essentially cripple satellite modems, thousands of them that the Ukrainians were using in the first hours of the war. My understanding is that that actually did have a significant impact on their ability to communicate in those initial hours and potentially even had operational impact as well.” – Dmitri Alperovitch

Disabled satellite communications meant that coordinating the military became a monumental task, and the Russians took advantage of this to mount their initial blitz.

To hear more from Dmitri Alperovitch and his thoughts and expertise on cyber attacks and cybersecurity, download and listen to this episode.

Dmitri Alperovitch is the Co-Founder and Executive Chairman of the Silverado Policy Accelerator, a non-profit focused on advancing American prosperity and global leadership in the 21st century and beyond.

He is a Co-Founder and former CTO of CrowdStrike Inc., a leading cybersecurity company. A renowned computer security visionary, he is a thought-leader on cybersecurity strategy and state tradecraft and has served as special advisor to the Department of Defense.

He is a frequent strategic cybersecurity advisor to CEOs and Board of Directors of public and private companies.  Alperovitch is also an active angel investor and board member at multiple high-growth technology companies.

In 2016, Alperovitch revealed Russian intelligence agencies’ hacking of the Democratic National Committee (DNC), events which unveiled the full scope of cyber influence operations being launched against the 2016 US Election.

In 2010 and 2011, Alperovitch led the global team that investigated and brought to light Operation Aurora, Night Dragon, and Shady RAT, groundbreaking Chinese cyberespionage intrusions, and gave those incidents their names.

In 2017, Fortune Magazine named Alperovitch as one of “40 Under 40” most influential young people in business.

In 2013, Alperovitch received the prestigious recognition of being selected as MIT Technology Review’s “Young Innovators under 35” (TR35), an award previously won by such technology luminaries as Larry Page, Sergey Brin, Mark Zuckerberg, and Jonathan Ive.

He was the recipient of the prestigious Federal 100 Award for his contributions to the federal information security in 2011 and recognized in 2013 and 2015 as one of Washingtonian’s Tech Titans for his accomplishments in the field of cybersecurity.

Alperovitch is currently a Senior Fellow at Harvard Kennedy School’s Belfer Center’s Defending Digital Democracy Project and Senior Fellow at Atlantic Council. He currently serves on the Advisory Boards for NATO’s Cooperative Cyber Defence Centre of Excellence (CCDCOE) and RSA Conference. He has previous served on Georgia Tech Information Security Center (GTISC) Industry Advisory Board. Alperovitch also serves on the boards of a number of cybersecurity companies, which are part of his portfolio investments.

Prior to founding CrowdStrike, Dmitri was a Vice President of Threat Research at McAfee, where he led company’s global Internet threat intelligence analysis and investigations.

With more than two decades of experience in the field of information security, Alperovitch is an inventor of 36 patented technologies and has conducted extensive research on reputation systems, spam detection, web security, public-key and identity-based cryptography, malware and intrusion detection and prevention. As a recognized authority on cyberespionage, cyber warfare, online organized criminal activity, and cybersecurity, Alperovitch has significant experience working as a subject matter expert with all levels of U.S. and international policy makers, intelligence and law enforcement agencies on analysis, investigations, and profiling of transnational organized criminal activities and cyber threats from terrorist and nation-state adversaries.

He is a well-respected technical and policy thinker on the most difficult global cybersecurity issues, and is a frequent speaker at military, intelligence, law-enforcement, academic and security industry conferences. Alperovitch has published and given numerous talks on the contemporary issues in cybersecurity policy such as cyberdeterrence doctrine, Chinese-sponsored cyberespionage and the use of cyber weapons on the future battlefield.