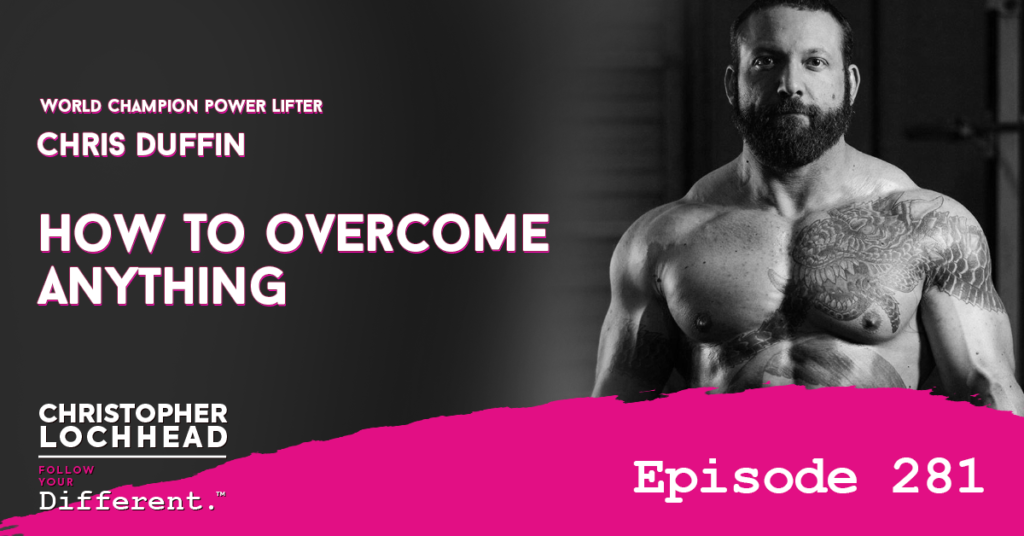 On this episode of Christopher Lochhead: Follow Your Different, we talk about how we can create & design your life, and overcome anything with our guest, Chris Duffin.

Chris Duffin is the world record holder in 1000-pound deadlifts and squats. He is one of the strongest men on planet Earth, which is a very legendary achievement. He’s also an author of a fascinating riveting book called The Eagle and the Dragon, a story of Strength and Reinvention.

Those achievement on themselves are amazing, but when you hear more about his background, it becomes a whole new level of legendary.

The conversation starts on the topic of alcohol, and how it helps take down the defenses that people normally have with strangers or on speaking in public.

Chris Duffin follows up with a related piece that he wrote about drinking back in 2014, which was called Whiskey and Deadlifts.

“It actually talks about how alcohol can be used as a performance enhancer. And I talked about the history of it actually being used as that which a lot of people aren’t aware of.” – Chris Duffin

It’s certainly not an endorsement of excessive alcohol drinking by any means. But it gives a good glimpse on the world of powerlifting. Chris also says that he might update it soon, so look out for that.

Chris Duffin on his journey

The conversation shifts to Chris’ life story, which he admits took him a while to tell it comfortably. For him, it shows how you can move the needle in life with the right approaches from a mental aspect. For Chris, it’s not exactly a “woe is me” story, as he has created what he wants to do with his life now, and moving forward.

The story is actually opening from his book, The Eagle and the Dragon. It starts when he was six years old and living in the wilderness. Not just for camping and vacationing, but full-on living in the wilds, exposed to deadly animals and the like.

“On that first story, I was being taught how to handle and capture live rattlesnakes, we were killing them, so that we could sell the skins and try to make ends meet. But also, I was being taught at six years old, because that was the environment we lived in. And then I needed to have that for my safety.” – Chris Duffin

Creating His Own Path

Other stories in Chris’ childhood involved other dangerous elements in their life, in this case it was traffickers and serial killers.

To be exposed to such situations at such a young age, it was not an environment that someone should be exposed to growing out. Which is why Chris found himself gravitating to sports, trying to bring in some money to help the family, and he also found comfort in doing athletic activities.

Due to his efforts, he eventually got a full-ride academic scholarship to go to a school for a dual engineering degree, and eventually worked on his MBA. As he was working and studying away from his family most of the while, it apparently got worse on the home situation. So much that he had to take custody of his little sisters, so he could help and guide them towards better choices in life, and help heal the trauma that they have been through as well.

To hear more about Chris Duffin and how to overcome anything in your life, download and listen to this episode.

Check out his book, The Eagle and the Dragon, a story of Strength and Reinvention