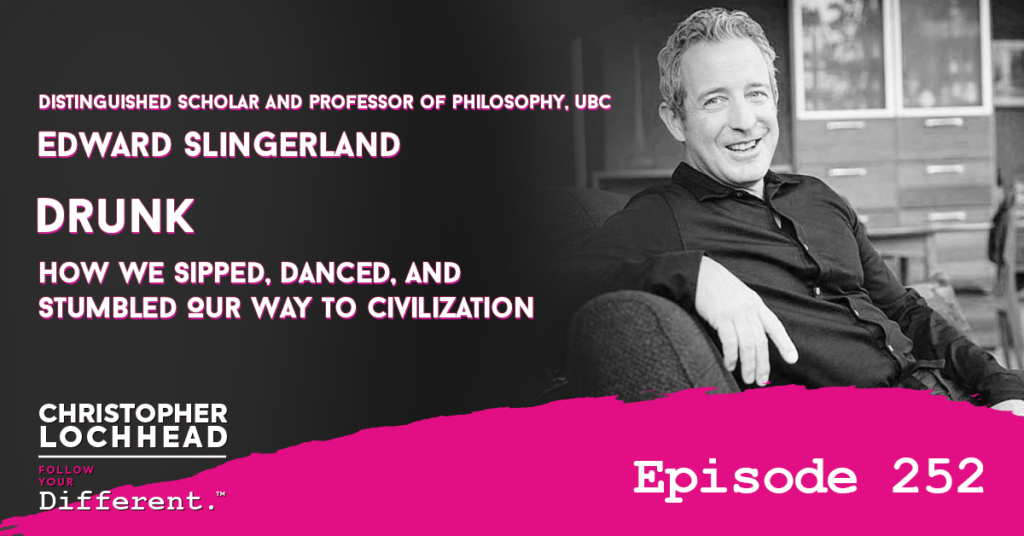 Almost everything academic ever written about drinking and alcohol is centered on why it is bad for us. In this episode of Follow Your Different, we have the audacity to ask, “How does drinking and getting drunk make a difference to humanity?” And to answer that question, we have Edward Slingerland with us.

A bit of a disclaimer before we proceed: it is clear that for some people, drinking is a horrible thing. If you’re somebody for whom drinking represents a problem, then please know you have our thoughts and empathy. However, this episode is one that is going to celebrate the difference that drinking has made to society. Our guest today delves into that and more on his new book that studied how drinking is great for us as a society.

Professor Edward Slingerland is a distinguished university scholar and professor of Philosophy at the University of British Columbia, Canada. His new book is called Drunk: How we sipped, danced, and stumbled our way into civilization. We dive deep into that and more on this episode, so stay tuned.

Edward Slingerland on Getting Drunk

Prof. Edward shared that he had fun writing his book, Drunk. On one hand, it’s a topic people are interested in a lot, because it’s about drinking. For Edward, it’s also a mystery worth exploring, despite most people not even realizing it.

Finding books about different drinks and how to get drunk around the world is easy. Finding one about why people like getting drunk, is not.

“I don’t think anyone’s ever explored just the underlying question of why we like to get drunk in the first place. And so, it’s fun to actually problematize something that people take for granted.” – Edward Slingerland

So, why do we get drunk? The easiest answer is that it makes us feel good. But that’s not really an answer, according to Prof. Edward. That answer just opens up another one, which is “why does evolution allow us to get drunk?” In simpler terms, “Why?” This is the central mystery that Prof. Edward wants to explore.

The standard story we’ve been told in psych textbooks is that it was an evolutionary mistake. We somehow discovered something that just happened to randomly hijack reward circuits in our brain. So as clever primates, we figured that we could just take a shortcut and feel good without doing anything.

“But evolution lets us get away with that because it’s not interested in a perfect system. It’s happy with good enough. And this system is good enough.” – Edward Slingerland

Reasons to Get Drunk

Despite all that, people have been gathering around the fire and drinking to their hearts content since the start of civilization. This just makes everything all the more mysterious, according to Prof. Edward.

Another thing that Prof. Edward noticed is that the evolutionary mistake story might not have been accurate. For one thing, most of our ancestors that domesticize plants didn’t do it for food. They were hunter-gatherers; they could just simply pick food up in the wilderness. Yet they still tried to grow such plants near their living spaces for easy access.

It was the same for the civilizations that discovered the ancestor of maize. It was a terrible grain to use as a food source, yet people chose to settle and raise this crop. All for the sake of getting drunk. So it was by no means an accident.

“There’s one estimate from ancient Sumer, is that half of the grain production went to making beer. So you’re taking in a place where people are on the edge of starvation, even in large scale civilizations, you’re taking half of your food stuff, and turning it into a chemical neurotoxin, something that’s going to harm your liver, increased cancer risk, lead to, potentially to social chaos, people drink too much of it. The costs that it imposes on humans means that it can’t be a mistake, there have to be countervailing benefits that that pay for the costs. So that’s what most of the book is trying to focus on what those what those benefits might be.” – Edward Slingerland

To hear more from Professor Edward Slingerland and why people love to get drunk, download and listen to this episode.

Edward Slingerland is Distinguished University Scholar and Professor of Philosophy at the University of British Columbia, where he also holds appointments in the Departments of Psychology and Asian Studies.

He is the author of several academic monographs and edited volumes from Oxford and Cambridge University Press, a major translation of the Analects of Confucius, and approximately fifty book chapters, reviews, and articles in top academic journals in a wide range of fields, from psychology, cognitive science and linguistics to Asian studies, philosophy, religious studies and international relations.

He is the recipient of several book, research innovation and teaching awards.

Dr. Slingerland’s broad research goals involve exploring the potential of novel digital humanities techniques, introducing more psychological realism and evolutionary perspectives to cultural studies and philosophy, and getting scientists to understand the importance and value of humanistic expertise—especially when it comes to research areas such as literature, ethics or religion.

His first trade book, Trying Not to Try: Ancient China, Modern Science and the Power of Spontaneity (Crown 2014), ties together insights from early Chinese thought and modern psychological research.

His second, Drunk: How We Sipped, Danced and Stumbled Our Way to Civilization (Little, Brown Spark June 2021), targets the standard scientific view of our taste for intoxicants as an evolutionary accident, arguing instead that alcohol and other drugs have played a crucial role in helping humans to be more creative, trusting and prosocial, thereby easing the transition from small-scale to large-scale societies.

Dr. Slingerland is also Director of the Database of Religious History (DRH), an online, quantitative and qualitative encyclopedia of religious cultural history, based at UBC and involving a large international network of postdocs, editors and contributors.

As primary investigator, he has received over $11 million in grants to support projects exploring the origins of religion and their role in supporting large-scale societies or developing innovative digital humanities techniques and platforms.

Slingerland is a US-Canadian dual citizen. He was born in New Jersey and spent fifteen years in California (San Francisco and Los Angeles) before moving to Vancouver, BC, to take up his position at UBC.

An avid ocean kayaker, gardener, cook and appreciator of wine, he splits his time between Vancouver, Canada and Northern California.

Check out his book: Drunk: How we sipped, danced, and stumbled our way into civilization

NYTimes: A History of Getting Hammered, and Why Some of Us Should Keep Doing It