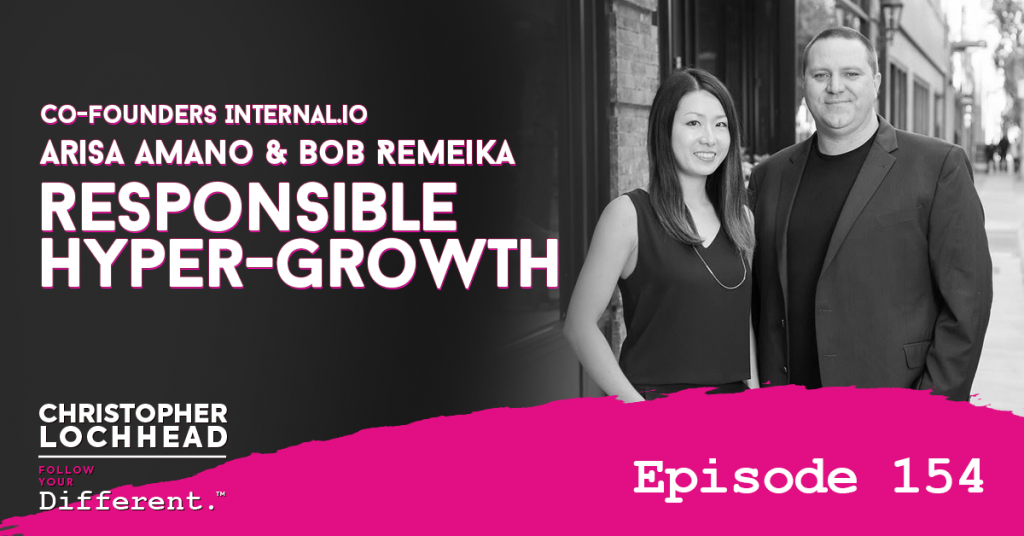 In this episode, two mission-driven, Silicon Valley entrepreneurs Arisa Amano and Bob Remeika, co-founders of hot startup Internal.IO and they are on a mission to change Internal systems and productivity.

We have a real conversation about how technology can positively change the way work gets done, why is it important to protect customer data and how the two of them have built both their relationship and their company.

Prior to co-founding the blockchain company Harbour, Anisa and Bob met at Yammer. They went ahead and launched Internal.IO when they realized that they have been building internal tools for different companies in the past.

“When Anisa and I were at Harbor, we realized we built this console internally and we look back and every other company that we’ve ever been at, we built internal tools for every single one. We started thinking about, what would be a good console and why do they get so bad?” – Bob Remeika

Bob further shares their observation on why consoles are inefficient. Companies always try to determine where to allocate engineering resources and ideally, they should be working for the core product since it is vital to the business. He further shares that consoles often times becomes a “Frankenstein Project” or a hodgepodge of information.

“These internal tools are necessary but what happens is you always go with what is the common denominator. Building them? You usually zap them together and so, you wind up with something that is inherently insecure. You’re giving away way too much customer information to too many employees throughout your organization, so you’re subject to access abuse.” – Bob Remeika

Anisa shares that Internal. IO aims to replace the internal tools that companies built. She cites Uber as an example, where the main product is the ride-booking service. However, in the background, there are multiple departments that need to share information to be able to fulfill their jobs, such as Customer Service or Operations.

The concern, however, the console is either hard to use or the app does not have proper permissions in place to control the access or the app is partially broken and a lot of different issues because its not the core focus of the company. That is where Internal.IO comes in.

To know more about why it’s cool to disagree, how Anisa and Bob have built trust and to know their thoughts on responsible hyper-growth, download and listen to this episode,

Arisa Amano began her career at VMware, a software company that provides cloud computing and platform virtualization software and services. As their marketing manager, she analyzed customer usage of products and created marketing campaigns; one of the campaigns was a YouTube video contest called “Run It with VMware.”

In 2010, she worked at MTV Networks as a Product Marketing Lead for Social Games. She worked across Nickelodeon, MTV, and Comedy Central groups.

In March 2011, Amano became the Director of Product Marketing & Design for Yammer. In December 2013, her role changed to Head of Lifecycle Marketing. She was part of the company until they were acquired by Microsoft.

In December 2014, Amano began playing the role of Vice President of Products for Zenefits. owned the complete relaunch of the Zenefits’ product suite, launching Z2 and HROne.

In 2017, Arisa Amano co-founded Harbor (blockchain) with Bob Remeika. Their team is in the process of creating a decentralized compliance protocol that standardizes the way securities are issued and traded on blockchains.

Bob Remeika is Co-Founder and CTO at Harbor, Inc.