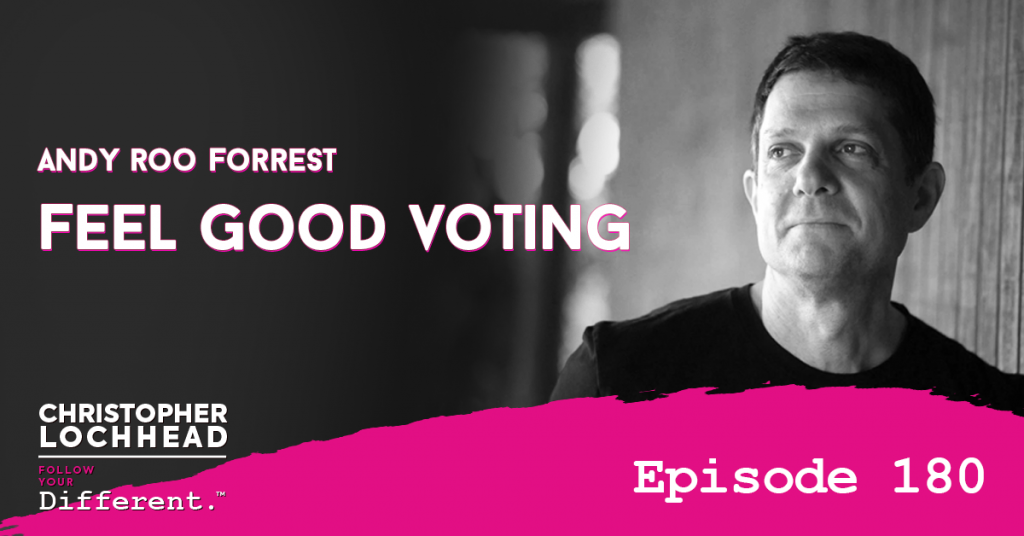 Today, we speak with entrepreneur turned activist Andy Roo Forrest. He is the founder of a fascinating nonprofit called FeelGoodVoting.org who is on a mission is to get more people in the United States to vote. We dig into why there is a low voter turnout in the past elections, and most importantly, what can be done about it now.

Andy and Chris also talk about how political attacks actually destroy the category called “politician.” Moreover, why this “attacks” drives disengagement and dissatisfaction among the voters. Lastly, find out how Feel Good Voting is creatively and innovatively using social media to encourage people to register and to vote.

Did you know who won the last election in the United States? We all know that President Donald Trump won the electoral college and that’s why he’s president, garnering a total of 63 million votes. Hillary Clinton got 66 million votes.

Andy shares about a recent study from Knight Foundation, surveying 14,000 people and why they didn’t vote. One thing was clear, most of those belong to the 18 to 30 age group. The participants also noted a few more reasons such as “my vote won’t matter,” it doesn’t make a difference,” or “I don’t understand what’s going on,” and “I shouldn’t vote because I don’t know enough.”

“A lot of people voted because they grew up in a family where their parents took them to the polling station. They remember their mom voting, and they went into a booth and pulled the curtain, and flipped the levers. A lot of people who don’t vote have no tradition of that in their family.” – Andy Roo Forrest

There are a lot of factors at play for the upcoming elections since Covid-19 happened. The average voting age is 58 years old. It can be noted that over 65-year old, white voters take a huge chunk of the voting turn-up.

“It boggles some of our minds that there’s many white, older Americans who are right now deciding whether they’re going to vote for Trump or Biden, that might seem that decision might seem preposterous to many of us. But most of the money in this campaign, upwards of $2 billion is going to be spent on that demographic because they show up and vote.  – Andy Roo Forrest

To know more about Andy Roo Forrest and his organization Feel Good Voting, download and listen to this episode.

In 1999 Andy co-founded the world’s most prolific board game design studio, which he sold in 2019.

At the moment, he is currently the Executive Director of Feel Good Voting, an issues-based media initiative dedicated to the advancement of social justice and environmental action.