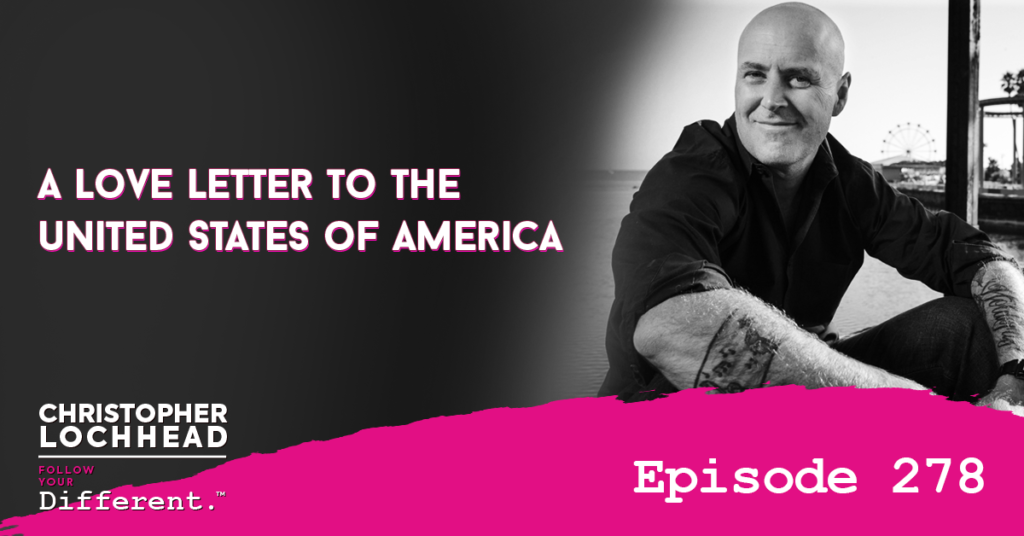 This episode of Christopher Lochhead: Follow Your Different is a love letter to America.

I recently posted something on LinkedIn and on social media about the court’s decision to overturn Roe vs. Wade, and I wanted to share that with you and reflect on it with you for a moment.

So, let’s talk about America.

People are saying this ruling put abortion back in the hands of the states.

Sort of, but not really.

It puts it back where it belongs in our hands. You and me get to decide what the future will be by voting.

A poll with 235,613 responses says that 58% support women’s rights to choose. Now, if the Democrats pick up seats in November, it will in large part demonstrate what Americans think about some combination of the abortion issue. And broadly, the Democratic agenda and how the Democrats have been performing in the White House and in Washington.

With Biden at 38% approval, it seems very likely that the Dems will pick up seats in November. If the predicted red wave hits Washington, it will for sure tell us that some combination of dislike for Biden, the GOP’s ideas resonating. and pro-life momentum are things that Americans are focused on.

Continue to have Meaningful Dialogue

Whether you’re currently celebrating or reverberating over the road decision. It’s important to underscore this is how it’s supposed to work.

We argue, we debate and hopefully we even listen radical idea, right? to each other. We come to our own conclusions, and we vote for candidates who most reflect our beliefs. Hating someone because they disagree with you might be the biggest stupid of all.

Now, to be clear, I am pro-choice. And I could tell you why if you cared, and I respect that pro-life people truly believe they are doing what’s best what’s right. And I know and love people who I know to be legendary, very good people who are pro-life. I just disagree with them. That’s okay. Steel sharpens steel. This is how it’s supposed to work. Please participate in thoughtful dialogue. And let’s all do some thinking, then let’s vote.

So that was the post and it seems to have blown up and hopefully caused some thought for a conversation. Some people have commented No, this is not how it’s supposed to work. And they have an opinion about why that’s the case. They might be right. But at a very high level.

The difference between democracy and insanity is we dialogue. We vote. We create leaders and create laws and then we live by them. What we don’t do is hate each other. And we don’t fight with each other physically. That’s called anarchy. And so I think what this tells all of us is, democracy is a participation sport.

To hear more of Christopher Lochhead’s love letter to the United States of America, download and listen to this episode.