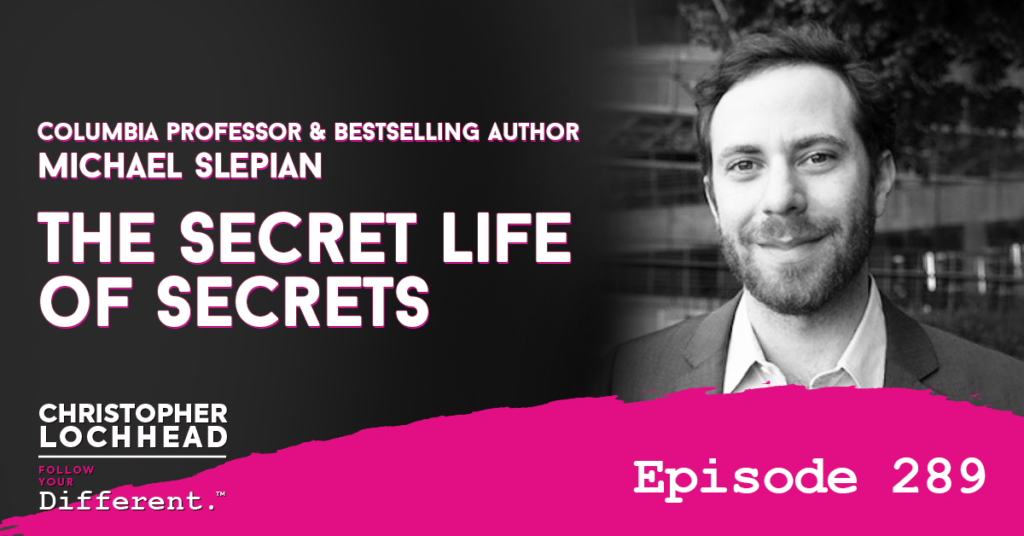 On this episode of Christopher Lochhead: Follow Your Different, we talk about something that every single one of us has, very few of us think or talk about, and it’s something that can have a profound impact on our lives. So let’s talk about Secrets with our guest, Michael Slepian.

Michael Slepian is an Associate Professor of Leadership and Ethics at the legendary Columbia University. He’s also a recipient of the Rising Star Award from the Association of psychological science. Michael is considered by many to be the leading expert on the Psychology of Secrets.

He’s got a brand-new best seller out called The Secret Life of Secrets, which we will get into this episode and much more.

The conversation starts out on secrets, and how we all keep them. As to why we have secrets, Michael was asked if there were pros and cons in keeping secrets from people.

But to keep a secret means you are essentially cutting yourself off from other people, so they couldn’t share your burdens or provide emotional support if that is part of what you are keeping your secret from.

Why We Keep Secrets

One reason that we keep secrets is that we often feel ashamed of those secret. In response, we bury it deep and isolate it from the public, so no one will know.

But this process of isolation also keeps it from receiving any validation if the secret is something to be actually ashamed of, or something that one only thought would be unacceptable.

“We’ll feel isolated with those secrets, we’ll feel inauthentic for keeping them and uncertain that we’re doing the right thing. But all these negative feelings are tempered easily when we start talking to people and getting the help that we need.” – Michael Slepian

Having Secrets is Natural

Michael further explains that having secrets is normal, and that people tend to keep the same secrets. On his research that shows 38 common categories of secrets, an average person has 13 secrets that fall on that list, and 97% of people would have more than one secret that is in that list.

“We all keep the same kinds of secrets. As isolating as a secret can feel, we all have similar ones. And so we’re not alone in the secrets we have.” – Michael Slepian

To hear more from Michael Slepian and the secret about Secrets, download and listen to this episode.

A recipient of the Rising Star Award from the Association for Psychological Science, he is the leading expert on the psychology of secrets. Slepian has authored more than fifty articles on secrecy, truth, and deception.

His research has been covered by The New York Times, The Atlantic, The New Yorker, The Economist, The Wall Street Journal, the BBC, NPR, and more.

Check out his new book: The Secret Life of Secrets