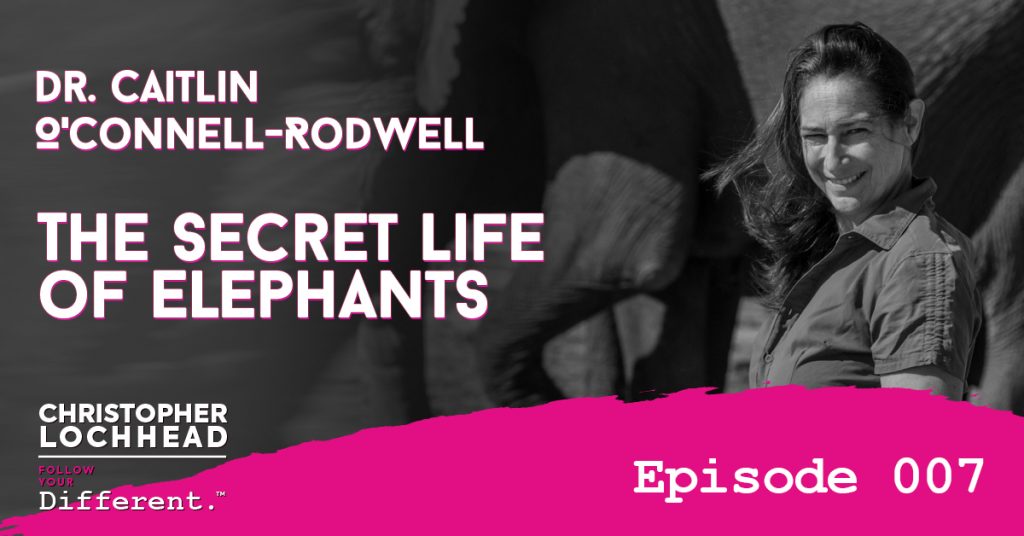 Today Christopher talks with Dr. Caitlin O’Connell-Rodwell the world’s leading expert on elephants. Dr. O’Connell-Rodwell explains how she discovered that elephants are just like us, they communicate through the ground and what all this means for human beings.

“Are (we) going to allow elephants to exist. Aside from poaching, it’s a land-use issue” – Dr. Caitlin O’Connell-Rodwell

Like the US/Mexico border issue, elephants struggle with similar issues. They recognize where it’s safe to be, when it’s hunting season and when to sneak into the cornfields when it’s ripe. Like humans, elephants know when is the best time to raid a resource.

“Like humans…the great leaders have an equal balance between carrot and stick. They are respected because they are tough but they are also soft.” – Dr. Caitlin O’Connell-Rodwell

Historically humans have always put themselves above other species. We are now at a time in history where we must re-evaluate that paradigm. There are critically endangered species and it’s up to us to decide whether they survive.

Elephant’s and Their Value System

Dr. Caitlin O’Connell-Rodwell says they have a value system but it’s also character driven. You have the confident matriarchs that help other elephants if they are in distress and then the young inexperienced ones will become nervous, scream and slap others away.

It’s a similar dynamic with the males, there are the aggressive brutes that others don’t want to follow because they are so aggressive. The leaders are the ones who have balance a good balance between strength and also the ability to be soft. Much the same as in human culture, the elephants with the best balance are followed.

To hear the rest of what Dr. Caitlin O’Connell-Rodwell has to say about what we can learn from elephants and why they are so important to our future, download and listen to the entire episode.

Dr. Caitlin O’Connell-Rodwell is a faculty member at Stanford University School of Medicine and a world-renowned expert on elephants.
She has dedicated the past twenty years of her research career studying elephant communication and how their societies are constructed and maintained, resulting in numerous scientific publications.
She is the author of the internationally acclaimed nonfiction science memoir, The Elephant’s Secret Sense (Free Press, 2007), which highlights a novel form of elephant communication as well as the elephant’s conservation plight.
Her photo book, An Elephant’s Life (Lyons Press, Fall 2011) conveys the complicated social lives of elephants through images, and her co-authored, The Elephant Scientist (Houghton-Mifflin, Scientist in the Field series, Summer, 2011), is designed to attract the 6-8th grader to a career in field biology.
Along with over thirty peer-reviewed journal articles, her essays have appeared in a number of popular magazines, including Smithsonian Magazine, The Writer and Africa Geographic.
Her work has been covered by multiple international popular magazines, newspapers, radio shows and documentaries.
She is the co-founder and CEO of the nonprofit organization Utopia Scientific (www.utopiascientific.org) dedicated to research and science education.
She teaches Science Writing for Stanford University and The New York Times Knowledge Network.

Share on FacebookShare on TwitterShare on PinterestShare on LinkedInShare on Email
Posted in Follow Your Different and tagged Dr. Caitlin Elizabeth O'Connell-Rodwell, Elephants