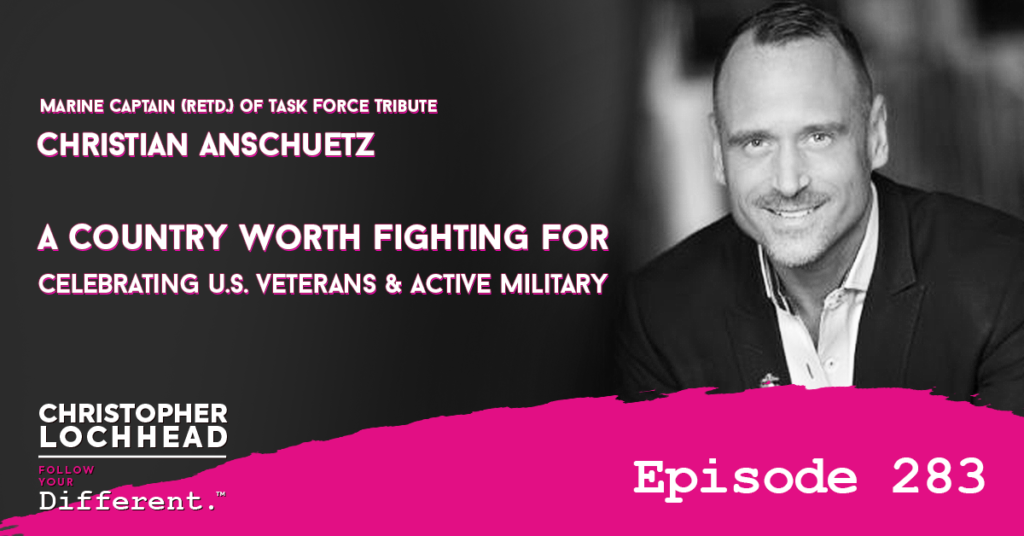 Today’s episode of Christopher Lochhead: Follow Your Different is a love letter to our military and veterans. Our guest Christian Anschuetz shares his story of how he looked up to these brave heroes growing up, and how he became one of the heroes that serve our country.

Christian Anschuetz retired from the U.S. military as a Marine Captain. After his service, he had a long and successful career as both an entrepreneur and an S&P 500, Senior C-level executive. After hanging up his uniform as and executive and advisor, he continues to serve as one of the leaders of the organization called Project RELO and will be spearheading an upcoming endeavor called Task Force Tribute.

If you are interested in his story, and the story of thousands of active military and veterans who have served our country, stay tuned to this episode.

Christian Anschuetz & the Legendary Humans of the US Military

Imagine being 12 years old at home with your dad, as you watch a strange car pull up in front of your house. Two men in uniform get out, and one’s a chaplain. This is an experience only Goldstar families know. This was also the moment a 12-year-old Christian Anschuetz, learned that his older brother and hero, Norman, had died serving his country.

Years later, Christian finds himself joining the military himself. He did so to honor the memory of his brother, and the love of country in his heart. He eventually became a Marine Captain and went to serve for several years.

We often forget that military service in our country is completely voluntary. So it takes a tough and brave soul to go through all the harsh training, and eventually deploy to dangerous and unknown territories. To sacrifice so much to serve speaks volumes to their love and loyalty to our country.

After Christian retired from service, he found himself in the entrepreneurial side of things, where he utilized his expertise in advising and training business leaders and executives on how to hone their leadership skills.

Christian talks about Project RELO, a veteran non-profit that he founded. He provides a quick description of what they do, and how they help hone the nation’s top CEOs and management teams to think different.

“What we do is we take some of the nation’s top executive leadership of fortune 500, CEOs and their management teams, and we provide leadership training to them. But what we do is we actually go on to military bases, and we conduct full military operations for three days. We do everything from convoy operations, communications, weapons handling, etc.” – Christian Anschuetz

The beauty of Project RELO is that the people teaching these leadership training are transitioning military members. So it not only trains future business leaders to focus and learn leadership skills from another perspective, it also helps these transitioning military members and veterans have an idea on how they can use their previous experience to find work, or even build up new careers.

Christian then talks about Task Force Tribute, which is a huge undertaking that Project RELO will be undertaking soon.

One thing he pointed out was that not a lot of people know that people they mingle with on a day-to-day basics is a veteran, or is serving in some capacity in the military. Part of it is the depiction of what military does in the media. So when they eventually leave the service, there are certain preconceptions on what they could do for a career or business moving forward.

As said earlier, Project RELO helps shine a light to both business leaders and military members that these military members’ skills are not just confined to military-related activities. They are well-equipped with other talents and skills, plus the military discipline that has been trained to them for years.

Task Force Tribute aims to tell their story in a more elaborate way. They want to tell the story of these legendary people, both active and veterans alike, and share their perspectives to those who they have protected and served.

To learn more about Christian Anschuetz, Project RELO, and Task Force Tribute, download and listen to this episode.

Executive leader and advisor in art and science of ‘strategy activation,’ Christian Anschuetz helps industry leaders re-imagine and re-invent how their companies do business. His unique blend of market-shaping vision and leading-edge tech savvy coupled with a strong belief in the power of service over self helps leaders step beyond conventional thinking.

Christian has held C-level and executive leadership positions at top global firms in the advertising, cyber security, global safety and supply-chain arenas, and is known for success in case studies by Microsoft, Intel, HP, and Oracle.

He is also a professor of Strategic Marketing in the MBA program at UNC in Chapel Hill.

As a proud member of the US Marine Corps, he founded and heads Project RELO, a nonprofit that helps veterans transition from military service to corporate careers through partnerships with executive business leaders.

You can catch him regularly on Cloud Wars Live with Bob Evans, “Anschuetz on Leadership,” or applying contemporary technologies to farming as cultivates his organic, sustainable lavender fields.