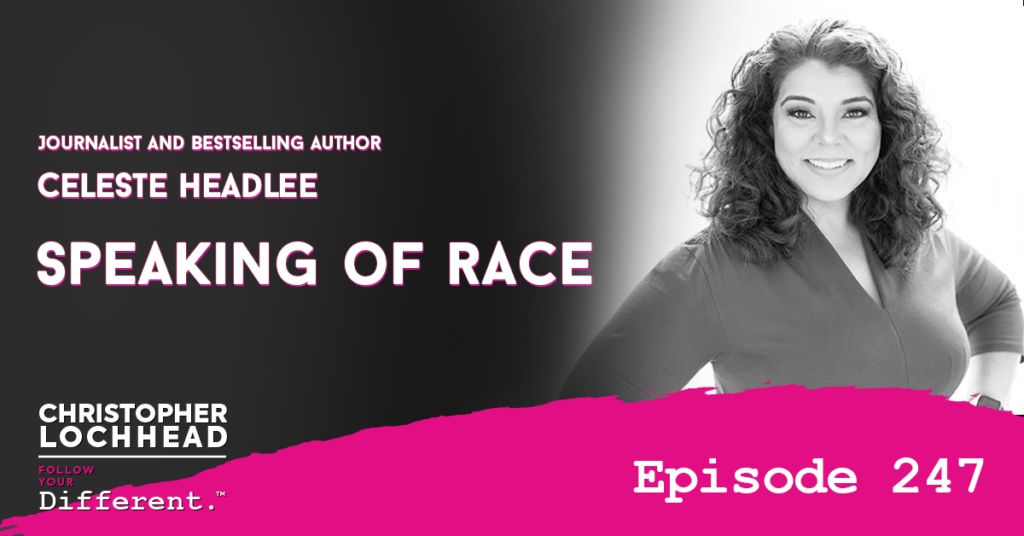 Our ability to communicate and collaborate is core to our humanity. Yet we live in a time where many of us seem to have a very tough time having real, powerful dialogues. In this episode of Follow Your Different, Celeste Headlee shows us how it’s done.

Celeste Headlee is the author of the bestselling book; We Need to Talk: How to have conversations that matter. She has also given out a TED talk, titled 10 Ways to have Better Conversations, which has 25 million views. Her most recent book is called Speaking of Race, which emphasizes the need to talk about racism, and how to do it.

What you’re about to hear is a deep conversation on why authentic conversations matter and how to have them. Also, pay close attention to her ideas on how you can be a more powerful conversationalist, and why our brain rewards us when we have real dialogue.

Celeste Headlee and the Passion for Conversation

“I mean, there’s just very little that we can’t talk through as human beings. And so I’m passionate about it because it’s universal. Every single person on the planet needs to be able to converse with others and communicate with others well, and be it’s just the root of problem solving. I mean, this is what solves problems, period, whatever they are.” – Celeste Headlee

Why People are not having Meaningful Conversations

Celeste shares her thoughts as to why people seem to have lost the ability to have a meaningful conversation. She has discovered an interesting tidbit while researching for her second book, and it dates all the way back to the Industrial Revolution.

While recent developments and social norms may have exacerbated the situation, the turning point seems to have happened when one guy discovered how to use steam to make our lives better.

“Prior to the Industrial Revolution. Most people lived in rural areas, most people interacted with maybe 100 or 150 people over the course of their lives. Then all of a sudden, the Industrial Revolution came in. Everybody flips over till most people are living in urban areas. Because of that, most people are encountering 1000s of people over the course of a week or a month instead. And it just happened too quickly. We weren’t able to adjust evolve that fast.” – Celeste Headlee

Bringing Back Good and Meaningful Conversations

In order to be a good conversationalist, you have to not only be a good talker. You also have to listen as well as you talk.

I think that some of the people that we think of as not being good in conversations are much better than they get credit for. And those are the people who speak less than they listen.” – Celeste Headlee

To hear more from Celeste Headlee on the importance of having a meaningful conversation, download and listen to this episode.

Celeste Headlee is an award-winning journalist who has appeared on NPR, PBS World, PRI, CNN, BBC and other international networks.  She was formerly a host at National Public Radio, anchoring shows including Tell Me More, Talk of the Nation, All Things Considered and Weekend Edition. For many years, Celeste has been a mentor and managing editor for NPR’s Next Generation Radio Project, training young reporters and editors in broadcasting.

Celeste is co-host to the Scene on Radio podcast—MEN with the podcast’s producer, Duke University’s CDS audio director, John Biewen. John describes the season: “Co-host Celeste Headlee and I will take a similar approach to the Seeing White series, which explored the history and meaning of whiteness. With MEN, we’ll be asking questions like, What’s up with this male-dominated world? Is male supremacy inevitable? How did we get sexism/patriarchy/misogyny, and what can we do about it?”

Celeste will co-host new episodes of The Retro Report with Masud Olufani. Retro Report is a non-profit news organization that produces mini documentaries looking at today’s news stories through the lens of history and context.

Until February, 2017 Celeste was the Executive Producer and host of the daily talk show called “On Second Thought” for Georgia Public Broadcasting in Atlanta.

You can listen live to On Second Thought, weekdays from 9 – 10 a.m. EST on the GPB News website. Click here for archives from past shows.

In 2014, Celeste narrated the documentary “Packard: The Last Shift” for the Detroit Free Press. She has won numerous awards for reporting from the Associated Press and SPJ.

Celeste was selected twice to be a Getty/Annenberg Journalism Fellow and was selected as a fellow with the Institute for Journalism and Natural Resources. She was also among the first fellows in Reporting on Native Stories for National Native News.

Until September of 2012, Celeste was the co-host of the national morning news show, The Takeaway, from PRI and WNYC and anchored presidential coverage in 2012 for PBS World Channel.

Check out her new book: Speaking of Race

Watch her Ted Talk: 10 ways to have a better conversation