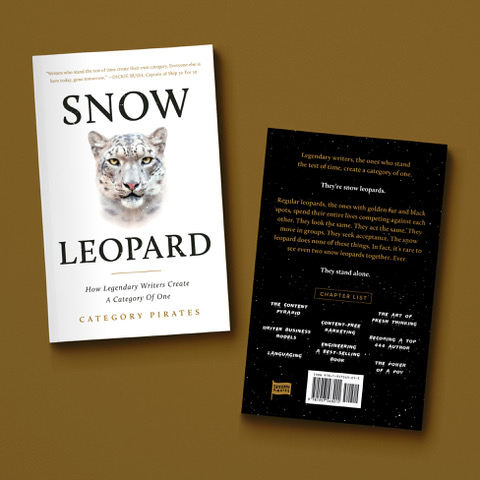 Most writers spend their entire lives trying to become “great.”

But what does being a great writer mean?

At what point is a great writer, “great?”

Let’s skip to the answer: Great is relative.

In order for you to be “great,” that means someone else has to be “not-great.” Which means the entire goal of becoming “great” is a never-ending cycle of comparing yourself to anyone and everyone around you, and then trying to figure out how you can “out-great” them—until the next person comes along, and who you have to “out-great” changes, and so on.

As ridiculous as this sounds, this is how most writers spend their entire lives & careers.

Comparing themselves to others in search of “greatness.”

Forever stuck in a game of competition.

Legendary writers, the ones who stand the test of time, do none of this.

Who is a better writer: Malcolm Gladwell or James Patterson? Most people rush to say the former, but the latter has sold 1000x more books. So how are we defining “great?”

The big question, of course, is how?

For example, what is the author Ryan Holiday’s category?

Ask 500 people this question, and all 500 will say the exact same word:

We as human beings are not taught to think this way. Instead, all growing up, we’re taught to choose an existing industry and then “compete” our way up the ladder. But this is not what legendary writers, creators, and even entrepreneurs do. Instead, they become known for a niche they own. Why has Ryan Holiday sold so many books? Because it’s very easy for readers to a) understand WHAT he’s writing about, b) understand WHO it’s for, c) understand WHY it matters, and d) talk about it.

So how fast does word-of-mouth marketing spread when everyone uses the same word to describe who you are and what you write about?

The answer is: very fast.

Your goal as a writer (or creator, or entrepreneur) is not to become “the best” in an existing category.

Your goal is to create your OWN category.

And then give readers the language you want them to use to describe who you are, what you write about, and why it matters.

Snow Leopard by Category Pirates is the first “writing” book ever written through a Category Design lens.

And each week, we publish a mini-book (5,000–10,000 words) on these subjects, educating people on the importance of differentiating themselves in their work and careers—and how exactly to do that.

But we just published a book specifically for writers & creators, called Snow Leopard, digging into how writers and communicators specifically should think about “niching down.”

We also conducted the world’s first non-fiction study of best-selling business books, reverse-engineering what made them successful. From there, we created our own framework you can use to ensure the book(s) you write have the most Reach & Resonance potential possible.

If you are not making 6 figures as a writer, you don’t have a writing problem.

You have a differentiation problem.

You have a languaging problem.

You have a category problem.

To fix that, give Snow Leopard a read. You can grab a copy here on Amazon (print & eBook).

This is the book I wish one of my Creative Writing professors had given me 10 years ago.

(It would have saved me a lot of time and wasted effort.)