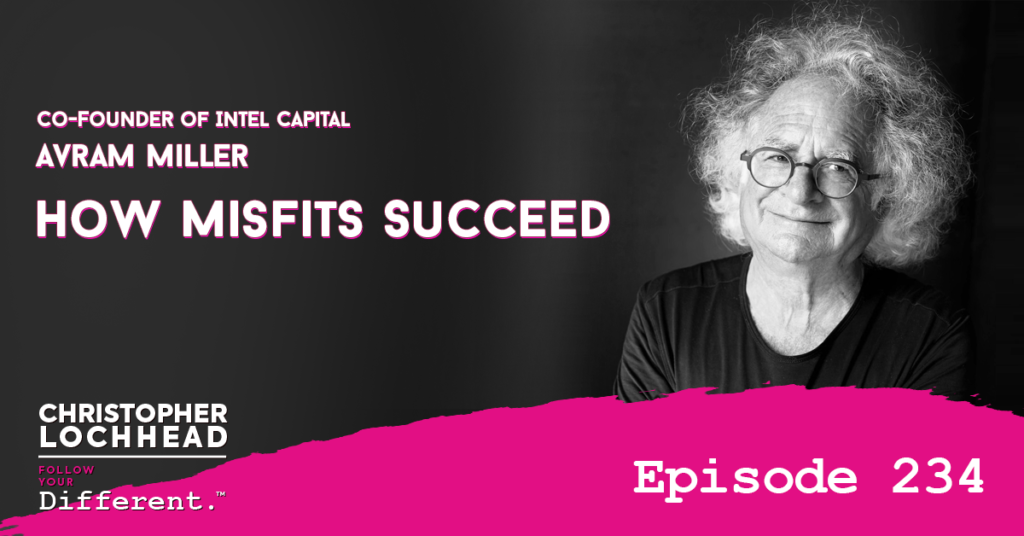 A few companies have had the impact in the technology industry that Intel has had. Without Intel, the personal computer might never have happened the way that it did. In this episode of Follow Your Different, we go inside Intel, and inside the life of one of the tech industry’s true living legends, Avram Miller.

Avram Miller is best known as the co-founder of Intel Capital, the most successful corporate venture group in the history of the technology industry. What Avram and his partners created became the model for corporate venture capital in Silicon Valley. In addition, he’s also famous for spotting and leading Intel’s initiative to create and expand residential broadband internet access.

He’s got a new book out, called Flight of the Wild Duck, and improbably journey through life and technology. So for those who call the Internet your home, stay tuned and have a deep, meaningful, and unedited real dialogue with a true legend.

Avram Miller on Being a ‘Misfit’

When asked about the term ‘misfit’ and what it means for him, Avram shares that for him, it was somebody who wasn’t really right for the system. Though it’s not like that somebody has a problem or is not doing anything, but more of that they couldn’t do what was expected of them.

Which was not to say that he himself was a misfit growing up. Rather, that was how he thought others perceived him. This left him confused and eventually getting the impression that there might be something wrong with him.

Nowadays, he doesn’t get the feeling of being a misfit anymore, though there’s still the notion of feeling like the odd man out.

“I think I still feel like the odd man out. Often, and not so much because of my life today. If I were to be back in my previous life, I would guess I would still feel like I didn’t quite fit in. You know, I was at Intel for 15 years, I achieved a fairly high position at Intel one of the when I was there. And that’s actually kind of what caused me to use the title of my book, which was the Flight of a Wild Duck, which is what Andy Grove, he referred to me as that. But you know, the, the Wild Duck is the duck does not going in the same direction as the other ducks.” – Avram Miller

Despite all this, Avram did not have any problems working for Intel, and the feeling was mutual. That’s because he has something to give to the company that they needed. So while he doesn’t think he fits in completely, he still had a lot to offer on the table, and Intel valued him for it.

“At Intel, things really based on results. And I had results, I could make things happen. So once I could show that I could make results, once I could achieve things, everything was pretty much okay, because I was judged on my contributions.” – Avram Miller

The Strengths and Weaknesses of Fitting In

That said, he thinks that while these systems are great for finding people that fit, there can also be drawbacks to it. While you can get people that might fit in to your idea of a perfect system, you might miss out  on those ‘misfits’ that end up changing the landscape of business.

“Most people go through life, and they go through some system, which was devised in the industrial age. You should think of that process is a funnel that’s filtering out people, it’s filtering out misfits. And at the end, you have people that are really, really good at doing certain things, and no good at doing other things. But those other things are needed. And it’s a strength, because you have all these people that are very, very good at doing certain things, like showing up on time. But it’s a weakness, because they don’t have the creativity, the imagination, the intuition, all this has been filtered out. Either they’ve suppressed it, or the people that had it just didn’t make it through the funnel.” – Avram Miller

To learn more about Avram Miller and his thoughts on how misfits can succeed in the tech world, download and listen to this episode.

He is best known for his work at Intel, where he served as vice president, co-founded Intel Capital, and led Intel’s successful initiative to create residential broadband.

He currently splits his time between Israel and the United States.

He is the author of The Flight of a Wild Duck, an improbable journey through life and technology