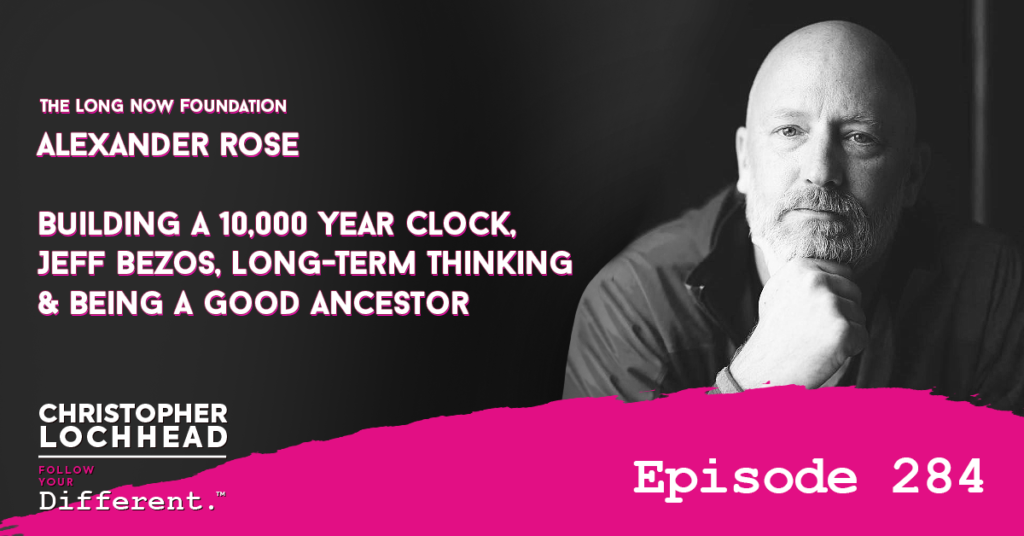 On this episode of Christopher Lochhead: Follow Your Different, our guest Alexander Rose asked me a question that stopped me in my tracks. We go deep into that question, and a myriad of other topics in today’s dialogue.

Alexander Rose is the executive director of the Long Now Foundation. And their mission is to foster long-time, long-term thinking. And they’re probably most known for the building of this massive 10,000-year clock with the support of Jeff Bezos.

The conversation starts off with Alexander describing the purpose of The Long Now Foundation and The Long Now Idea itself. It was started by a set of both technologist and artists, who are part of the earlier generation of Silicon Valley.

“It was a group of people that were realizing that by the kind of fetishization of speed that was happening, especially around Silicon Valley, in technology, circles, that we were taking a lot of things off the table. So things like climate change, if you were only given a few years to solve something like that, you basically won’t even start. But if you are willing to think about something, at least in terms of centuries or generations, you could imagine how you might solve these large challenges that humanity is now facing.” – Alexander Rose

Humanity 10,000 Years into the Future

The focus then shifts into the story of what will happen 10,000 years into the future. For Alexander, he believes that humanity will still be there, but it depends on what we do today if they are thriving or struggling by then.

“I very much believe that humanity is going to be around for the next 10,000 years. The question is, are we making decisions that are going to help those future generations right now? As Jonas Salk originally asked: Are we being good ancestors, or are we being bad ancestors? And how can we be better ones?” – Alexander Rose

Alexander then proceeds to discuss our ongoing report card on the matter.

Alexander Rose on Thinking of the “Good Old Days”

Talking about the past, particularly the notion of the good old days, Alexander firmly thinks that we definitely have it better today than in the distant past. It is just that, we are used to modern comforts and the ever-growing technology at the palm of our hands, that we take those things for granted and focus on the bad things todays and reminisce on the good memories from the past.

Alexander describes it like a pendulum swinging back and forth. While there are swings on both directions, the momentum for the forward / positive swing is oftentimes bigger than the backwards or negative one.  Though granted in today’s climate, it’s hard to see the positives than the negatives.

While the past would be nice to visit, a person from this time would find it a horrendous place to live in, minus the comforts that they have been accustomed to.

To learn more about Alexander Rose and The Long Now Foundation and mindset, download and listen to this episode.