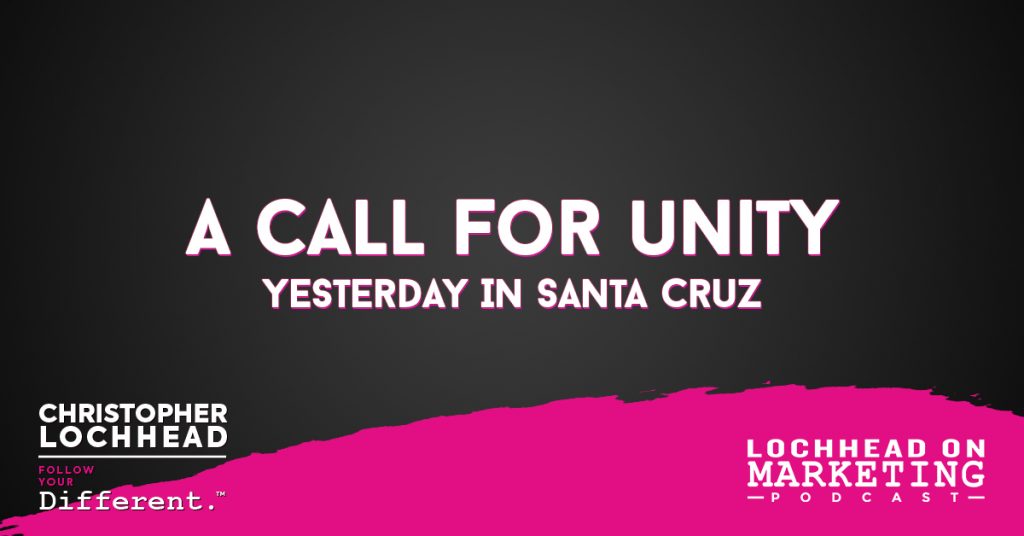 Yesterday in Santa Cruz, I cried at the vigil for Sargent Damon Gutzwiller, of the Santa Cruz County Sheriff’s department.

He was shot to death on Saturday.

Yesterday in Santa Cruz, I paddled out for George Floyd.

With over 500 people (A paddle out is how surfers mourn).

There have been paddle outs for George Floyd all over the world. Yesterday in the Ocean of Santa Cruz, people of many races screamed “Black Lives Matter”.

Yesterday the people of Santa Cruz showed that you can stand against evil racism, and stand for good cops.

At the same time.

Because both are the same thing.

Both are stand against violence.

Both are stand against evil.

Yesterday in Santa Cruz, I cried for these two men. And so did countless others. Of virtually every race.

Of all the tears that were cried yesterday in Santa Cruz, every single last one of them, was colorless.

A story I have never shared before.

Last year, one of my best friends was brutally murdered, in Santa Cruz.

It will always be unbelievable and unbearable.

A walk-through fire I wish on no one. If you are ever in this situation, you’ll discover how badly you need the cops.

In the moments after I learned what happened,

I was over-come by a Mavericks sized wave of horrible emotions and a profound sense of helplessness.

Which is not a feeling I am used to.

Sometimes, life gives you no choice. You have to grapple with a soul-crushing reality.

You have to accept an absoluteness you cannot change. As this washed over me, I realized something.

I desperately need the cops.

Because, police have the authority and ability to solve heinous crimes in a way that no one else does.

The four men who killed him are white.

Over the past months, I’ve had a front-row seat to a massive, complex murder investigation.

He’s what I learned.

There are legendary cops.

A lot of them.

We saw the sleepless nights the investigators endured.

They fought as hard as I have ever seen anyone fight.

We are forever grateful for the Santa Cruz County Sheriff’s Department.

If I were to name all of the amazing people who worked this case, you’d stop reading this post.

What I’d like you to know is, they cried with us.

Above all, we got to see peacekeepers with an unending commitment to justice.

I share this with you, because I have experienced the positive power of policing.

I have seen women and men, of every race,

get up every day, put on a bulletproof vest and a badge to risk their lives.

To serve and protect us.

So, the time has come for all of us to demand justice for George Floyd.

To demand equality for African Americans and all people of color.

And to demand real police reform.

It is critical that we remember, that it is possible to demand justice for George Floyd, to demand reform and equality, and support the good cops.

At the same time. There are some in our country who would divide us.

Let us remember there is no us and them.

There is no difference between Black, White, Brown or Blue.

Because evil comes in all colors.

And tears are colorless.